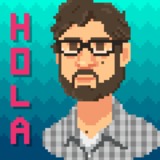 Shutter this project. Put the idea on the shelf, reboot, and try again in a few years. I just don't what value a "fixed' Anthem has at this point. At best, you achieve 'thanks, you made the game you promised half a generation ago." But if the salvage attempt stumbles at all, it only underscores the game's real and perceived failures.

If enough of the actual boots on the ground dev team have the drive and desire to make the effort, then it's at least worthwhile for them. But Bioware is already being dragged through the mud as it is, if the effort to save it is some exec's attempt to pull off a AAA No Man's Sky story at the cost of an already struggle dev team... that sucks.

It really just seems like there are more positive outcomes from moving on, at least for now, than continuing to beat their heads against this wall.

Don't expect me to be great, but I'm really excited for this game and would love a cool group to play with!

Ive always liked fighting games, but at a very casual level. Really enjoyed the first game, so much so that I'm probably going to get the ultimate edition. The fact that I'm not that into DC says even more. The system felt fub to get into and enjoy, but still has a high skill ceiling I can work towards.

I hope they do a QL, but they did an unfinished and a UPF segment already that, having bought the game, I can tell you offer accurate representations of it.

If nothing else, O'Donnell's music is what't stuck with me more than anything else in the Halo games. I think Bungle and Activation screwed up. Imagine how insulting that would be, to make a work of art, and then having a marketing/pr guy say, "we're going in another direction."

I mean, I'm bummed by all of this as well, since his music is a definitive part of the Bungie I love, and I agree that their/Activisions' decision was a bad one. But, when you work as a "commercial creative", having marketing and PR guys decide to go in other directions is how the business works. It doesn't feel good, but to enter into that world without at least acknowledging that as a very real possibility is just naive.

Has anyone tried this on a Mac? I have KOTOR I, but it runs fairly poorly on my 2013 Macbook Pro. It plays, but just doesn't seem optimized (why would it be?). The specs for KOTOR II are well below what I have, but I'm just extra cautious about games I play because this is the computer I use for work as well.

Wow. What a loss for gaming.

And unfortunately, until today I was really unaware of Iwata's full impact on gaming in general, and even in my early childhood. I wrote a little bit about that here. Apologies if this comes off like shameless self promotion, it's just easier to link than to regurgitate it all again.

Thoughts and prayers to all of Iwata's family and friends, and for those who knew him, and his legacy far better than myself.

...oooooouuuccchh. Hope they get their act together. I guess it's better for them to pull it than keep selling it in the state it's in but man, that's going to hurt trust with a lot of people.

This is great in every way. Had this been my poster, I probably would have put in a Ryan nod somewhere, but Ryan's influence will always be a part of GB. We don't need to see his ugly mug to remember that.

I'm so happy to be a part of this community.

How could I not join in on this?