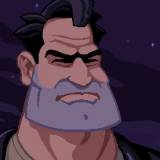 Skate 2 is everything I wanted from a sequel and more. I love the diversity in the environments. I can cut some realistic lines one minute and go craczy  with 100 foot drops to launch ramps the next. There have only been two really frustrating challenges so far; 'Can you spell GIRL' and one where they want you to handplant the walkway above Slappy's half pipe. I have completed both but not without it making me go a bit crazy. I've wrapped up the career paths and am now working on the hilarious Hall of Meat challenges.

All in all, I see myself investing heavily in this game. Now its off to 1000/1000 it. I'm half way there.
4 Comments
Load Comments

Blogs Created:
8 blogs
Most Commented blog:
It must be official. (Top ten games of all time)
Total Comments on blogs:
93 comments