by Jeff Gerstmann on January 19, 2010
Share:TwitterFacebookReddit

Dark Void lays down a great foundation with its solid premise and characters, but the action is grounded by a handful of technical issues.


Here we are, it's 2010, the first year of the far-flung future. yet we still do not have jet packs. Actually, I'm not sure what's more depressing: the lack of jet packs or the frequency with which they are brought up in relation to it being 2010. But let me open the wound one more time by telling you that in Capcom's Dark Void, human beings encountered jet packs all the way back in 1938. One such human is Will Grey, the game's protagonist. His story is an interesting one, but a series of unfortunate technical glitches get in Dark Void's way.

In fact, the fiction behind Dark Void and the way that story is presented are probably the best things about the game. It opens with a sort-of-stock "plane gets sucked into the Bermuda Triangle" event, and from there you discover a new world that is ruled by an oppressive race of shiny metal robots called the Watchers. These guys have their hooks in everything, both in the Void and in the real world. In the game's first cutscene, Will and an old flame named Ava get stranded in the Void. From there you'll encounter villages filled with humans who worship Watchers as if they were gods. You'll also encounter Nikola Tesla, who's been reengineering Watcher technology to help the stranded humans rise up against the Watchers. Will quickly gets his hands on a Tesla-built prototype jet pack and, just as he's about get in over his head, he meets up with the resistance and becomes a powerful new force in the fight.

That fight takes place both on land and in the air. You'll start out the game on the ground, and when your feet are firmly planted there, it's a very familiar-feeling third-person shooter. You'll take cover behind objects and pop out to gun down the Watchers whenever they attack. Will starts out with a basic assault rifle, but you'll also have plenty of opportunities to use enemy weapons. The rest of these guns fill out the arsenal, and include equivalents to the standard sniper rifle and rocket launcher. There are six weapons in all, and each can be upgraded twice using tech points that you earn for collecting orbs that appear after kills. The weapons have a passable feel to them, but once you're fighting airborne Watchers that won't sit still, the amount of time you spend leading your targets will probably make you wish for some guns with faster projectiles. Also, most of the weapons are only especially useful in specific cases. I spent the bulk of my time using the Watcher version of the assault rifle. Still, blasting the Watcher robot suits apart and getting a look at what's inside is pretty satisfying, especially when you're landing head shots.

After a brief stint on foot, you're equipped with a hover pack. Though you're not going to do much flying in it, the ability to jump up and glide in the air for brief periods of time changes your tactics dramatically. When you can position yourself above the enemy's position, the cover they're hiding behind doesn't work so well. There's a certain "death from above" mentality that feels pretty good, though it doesn't take long for your foes to start employing the same tactics. As a result, you can't stand still for particularly long.

After a level or two with this hover ability, you'll upgrade to a full-on jet pack. At this point, you can enter fly mode at any point... though if you aren't flying in an area that was clearly designed for full flight, you're likely to bump around into walls and meet a quick end. Taking flight often feels like you're barely in control, and at first, this can be frustrating. But as you get better at controlling your flights and--more importantly--you gain a better understanding of when you should actually choose to fly, it can be a lot of fun.

When you're flying, the game takes on the control stylings of an arcade-style dogfighting game. A number of the folks behind Dark Void worked on Crimson Skies: High Road to Revenge for the Xbox, and it shows in the way the air combat controls. You'll be able to pull off evasive maneuvers to dodge incoming fire as you fly around large canyons and face off against enemy UFOs. If you get close enough, you can even opt to steal one of these enemy flyers, but the half-Quick-Time-Event, half-minigame you'll perform every time you want to get in a saucer gets tedious after its second or third appearance. The guns mounted on your jet pack are powerful, and Will is resilient enough to not really need the extra armor that a UFO provides, so once I got comfortable with the flight controls, I stopped UFO-jacking entirely. Other than a sequence where you have to fly around a large aircraft to power-up its engines manually, and then another sequence where you're defending said ship from waves of enemy attacks, most of your air time is spent knocking the same UFOs out of the sky. While the controls feel fine, the enemy's tactics never get tricky, and there are only around four different sky-based targets, one of which is a stationary mine.

Though both the on-foot and flying action can get a little repetitive, the game's story carries things along well enough to make Dark Void worth seeing through to its cool-looking final battle and the story's conclusion. That said, the game has a few different technical issues that get in the way--at least on the Xbox 360. For starters, the frame rate gets uneven when the action heats up, both indoors and out. The texture pop-in that has become something of a signature for the Unreal Engine is present, as well, and in one case, I ran into a spot where the more detailed textures would fade in, then immediately pop out to become blurry again... only to fade back in a second later and repeat the whole process until the end of the cutscene. This all happened during a fairly climactic moment, which can really take you out of the story. Lastly, some of the speech stuttered a bit during cutscenes.

The best part of Dark Void's presentation is its orchestrated soundtrack. Like a great piece of science-fiction television, Dark Void establishes a core melody, then revisits it in different ways, giving you a triumphant feel when appropriate, a down-trodden version for the darkest parts of the void, and, just for kicks, an 8-bit version to play over the end credits. It probably says something very specific about my tastes that it's that NES-style take on the theme that's stuck with me. The voicework is solid all around, with Nolan North heading things up as the voice of Will. He turns in a fine bit of work here, but little things, like the way he mutters "I bruise easily" when getting shot at, get a little too close to Nathan Drake territory. But with a solid supporting cast backing him up, it's hard to harp on the Will's Drake-like performance.

There's a cohesive art style to Dark Void that makes it look different than the typical Unreal Engine-based shooter. For starters, there's a lot of open sky in the game, which makes Dark Void look a lot brighter than its name might lead you to believe. Also, the character models have a slightly exaggerated look to them that, when combined with a similar style of character animation, give the game's characters an interesting look. This especially helps the game's cutscenes, where Will and the other humans emote really well with their eyes. Between the dialogue and their body language, it's easy to see that there's history between Will and Ava, for example.

The core elements in Dark Void are well-designed and fun to play, and it tells an interesting story while setting up a world that's developed enough to deserve a sequel. But with its technical problems and a lack of enemy variety, Dark Void starts to feel like the game is getting in the way of its own universe. It's worth seeing for its unique twists on third-person shooting, but you'll probably come away feeling like it could have been much more.
Jeff Gerstmann on Google+
Load Comments 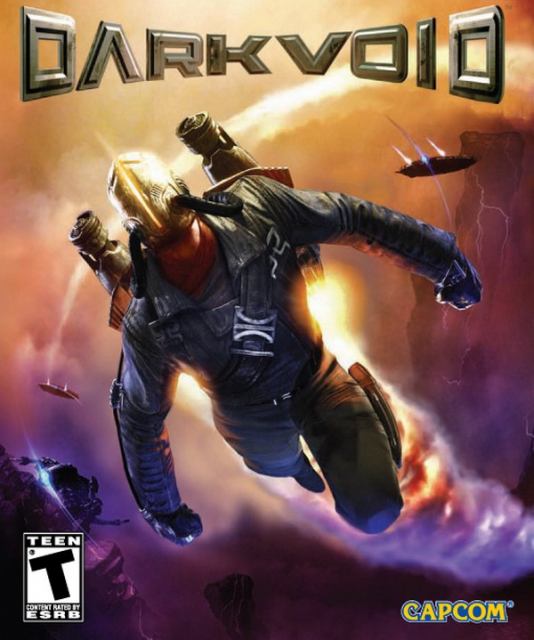