by Jeff Gerstmann on October 27, 2009
Share:TwitterFacebookReddit

DJ Hero's gameplay is challenging and exciting with a feel all its own, making it a welcome addition to the world of peripheral-based rhythm games.


It's been awhile since we've seen an honest-to-goodness turntable video game here in the US. Konami experimented a bit with Beatmania, but it's been a pretty dry decade. That's part of what makes Activision's DJ Hero so exciting. It's a new peripheral with a new take on how rhythm games are played. It's also exciting because it represents genres of music that aren't getting much attention from the power duo of Rock Band and Guitar Hero, like various types of electronic dance music and hip-hop. With a cool setlist that's implemented in a unique way and a peripheral that backs up the on-screen happenings pretty well, DJ Hero is a solid start to what will probably make for a fruitful franchise.

Sorry to open up by looking ahead to sequels that haven't been announced yet, but the big thing you'll probably notice about DJ Hero is that it feels like a first-generation product. Remember how the original Guitar Hero didn't let you do much more than just play the songs and look at your score? That's most of what DJ Hero has to offer. You're presented with different mixes, each with anywhere from two to eight songs in it, and you'll play the tracks, one after the next, until you've completed that tier of songs. You'll earn stars for your performance, which opens up more set lists and additional window dressing, like playable characters, new stages, more outfits, and so on. Some of the characters are real-life DJs, like Z-Trip, Grandmaster Flash, and Daft Punk.

That sounds straightforward, but there's a bit more to it. You can play against another player either locally or over the Internet. These are simple score competitions that allow the host to build a custom playlist, if desired. You can also play ten of the game's tracks with a local player wielding a Guitar Hero guitar controller. This seems like it was added as a bit of an afterthought. Sure, these custom mixes aren't found in a non-guitar format, but the guitar parts can be repetitive in some cases, and get lost in the cacophony of DJ whistles and scratching in others.

The game is played with a custom-built turntable controller that has a crossfader, an effects dial, a button to activate Euphoria (which is the game's equivalent of Guitar Hero's star power), and a turntable with three buttons on it. Your primary activity is pressing these buttons and holding them while you scratch the record back and forth in time with the on-screen indicators. The game will also tell you when you flip the crossfader back and forth, which cuts between the two records. For the most part, the controller is fine, but scratching while holding down the buttons feels a bit weird. It's like the turntable's platter is a bit too heavy, so it gets moving with a bit of momentum when you're scratching. This leads to imprecision, which is never great in games like these. Also, you'll probably need to spend some serious time with the controller to get used to hitting it without looking down at it. Also, the crossfader can be a little tricky. It's easy to slide it too far when you're trying to center it.

So as you might have guessed, this game isn't as easy to pick up and play as Guitar Hero was back in its day, since the activity of DJ'ing is a bit more abstract, but the game opens with a great tutorial that helps make everything clear. That said, you'll need some practice to actually get good at the game. It didn't take much time for me to start getting five stars on every song I encountered on medium, but the two harder difficulties make meaningful changes to the way the game is played, making it both more difficult and more rewarding. While playing on medium, I felt like I was growing into the harder difficulties as I played.

There aren't too many surprises in the way DJ Hero plays out, as you're essentially just playing along to the music. If you match the on-screen cues, you earn stars and the music plays properly. When you miss, things go poorly, but you'll never fail out. The game will let you trudge on with your performance, even when you're playing like crap. There are a few wild cards that let you have a direct impact on the sound of a song, like the effects knob, which you can use to filter the tunes in certain spots. Occasionally you'll get big lines down the middle channel. This is your cue to go nuts with the center button to freestyle some extra effects over the music. You can select from multiple packs of freestyle sounds while you're selecting your character, giving you access to banks of Flavor Flav samples, spacey dub siren sounds, and a rough equivalent to that dancehall air horn noise that all DJs use. All of them. Clearly, the air horn is the only correct choice, but ultimately, your off-beat slamming of the center button only serves to make the songs sound worse. The rewind feature, which lets you back up a portion of the song and play it again with a double-score multiplier, is also neat in theory, but it almost never sounds good. It uses a generic rewind noise and never sounds natural--you always feel like you're knocking the song off-beat. Still, using things like the rewind and euphoria power is the key to earning high scores and getting stars.

There's a really sharp soundtrack in DJ Hero that covers a lot of different genres. With the guitar controller playing into some songs, you'll find songs from the Foo Fighters and The Killers in there, as well as a version of Motorhead's "Ace of Spades." But you aren't playing these songs on their own. Each track is built from two or more different songs, and they're mashed together to form something new and kind of crazy. Sometimes it works out perfectly, like when Daft Punk and Queen are dropped into one track. Other times, it feels a little hokey, like when DJ Z-Trip and Murs rework Foreigner's "Jukebox Hero" into a song about turntables called, you know, "DJ Hero." By and large, the mixes are well-produced and many of them could stand on their own outside of the game.

Visually, DJ Hero does the same thing that all games like this do. You'll be too busy focusing on the highway to see what buttons you need to hit next to notice the variety of backgrounds and characters. One thing you'll definitely notice, though, are the constantly flashing lights in some areas. At times, I felt like the game should stop and throw up one of those epilepsy warnings. Last night I seriously thought about sliding a wallet under my tongue, you know, just in case. The stages and strobes and huge party scenes actually look really cool, if you have time to pay attention to them. Also, watching virtual Daft Punk, dressed up like robots, slamming pads and buttons on their polygonal gear is pretty cool. Unfortunately, there are a lot of times where the on-screen DJ isn't matching your actions. Watching Jazzy Jeff throw his hands in the air while you're furiously scratching just looks like a really goofy oversight.

It's a bit barebones, and the turntable controller feels like it could have been better in a couple of spots. But as the start of something new, DJ Hero provides a very strong foundation that things like additional downloadable content or full-fledged sequels could really build on. If you've been fiending for a rhythm game that represents a different style of music or you just like cutting and scratching, DJ Hero's a lot of fun.
Jeff Gerstmann on Google+
Load Comments 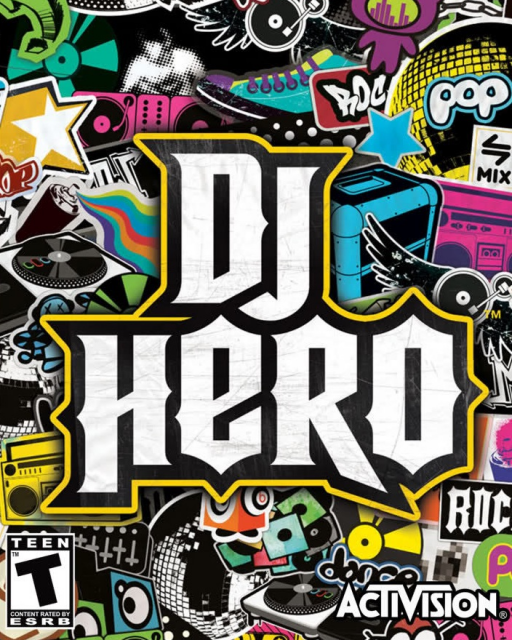