Brad's looking for a soul to steal, and this one is just too good to pass up.

by Brad Shoemaker on January 14, 2013
Share:TwitterFacebookReddit

The character action genre hasn't been this stylish or crazy in a good long while.

The reborn Devil May Cry from Ninja Theory exemplifies what it is to really get down in the dirt and reimagine a hallowed franchise from the ground up, bringing back only the broadest character traits and relationships but leaving behind everything else about the old that gets in the way of creating a singular, cohesive new. Names like Dante, Vergil, and Mundus return, but the world they inhabit and the roles they play out are only passingly similar to what you knew of them before. Everything in this new game exists in service of making it a great game in its own right, not in stoking your nostalgia for the games you played over the last decade. As a character action game, it hits all the notes--fast, robust action, marvelous visual style, and a tremendous sense of attitude--you could want in this type of game.

To be fair, on paper, everything about Devil May Cry sounds like the tritest video game pap: a bloody war between angels and devils, endless hordes of demonic enemies straight from your favorite '80s heavy metal album art, and all of it punctuated by Scandinavian "hellektro" outfit Combichrist's thudding soundtrack. And then there's Dante, remade in the image of a club-kid layabout who's so sneeringly self-satisfied he defies any attempt you might make to identify with him. I pretty much went into the game consciously expecting to hate all of this, or at least view it as the sort of eye-rolling embarrassment video games are usually so good at delivering.

Then, oddly, I started feeling a guilty pleasure at how much I was actually enjoying the spectacle. Then later I gave up the guilt and just flung myself wholeheartedly into the cyclone of nonsense. I think it became easy to like Devil May Cry because it seems somewhat aware of itself; the game is so damn committed to having fun with its absurdity, you can't help having fun along with it. Dante may be a smirking wiseass, but his lines are witty enough and delivered with so much panache, you quickly grow to like him anyway. And he makes a great foil for his brother Vergil, who's more of an uppity, refined ideologue fighting the good fight against the demons. Dante talks a constant stream of shit to Vergil and just about anyone else who gets in his way, and there's something uncomfortable and a little dissonant about a 50-foot ancient grub-demon screeching "FUCK YOOOOOUUUUU!!!" right back at him. The best sort of dumb fun is the kind that knows how dumb it is, and I consistently got the sense from Devil May Cry knew that the entire time I was playing it.

The game also knows when to rein it in, though. After the dramatic triumph of Ninja Theory's last game, Enslaved, it shouldn't surprise you that I'm back to devote another paragraph to the characters' performances in this game, which do so much to sell what, again, probably should have been a complete joke of a storyline. Where Enslaved had a lot of heart, Devil May Cry offers an equal amount of middle finger, but it still manages to lend an appreciable level of gravitas and some occasional poignance to its tale of saving the world from demons who have enslaved the human race with... soda. As before, the success at selling you on the plot simply comes down to all the subtle eye movements and shoulder shrugs and skilled line reads that add up to real, believable performances, the kind of thing you get when you go into a performance-capture facility and fill it with people who can, you know, act. That the characters here do so much to uplift Devil May Cry's ridiculous premise is a testament to both the capability of performance-capture technology and Ninja Theory's use of it.

Lest we forget this is also a video game: Devil May Cry is in fact a greatly entertaining character action game, as fast-paced and diverse as I could have wanted. The game starts you off with Dante's familiar sword and dual pistols, but you quickly start to collect angel and demon weapons, which fill light and heavy attack categories respectively. Switching between melee weapons, and the three firearms you end up with, just takes a tap of the d-pad. You only have a single attack button which wields your sword by default, and you switch to the equipped angel or devil weapon instantly by holding the left or right trigger and hitting that same button. The game finds a lot of interesting ways to make you stay on your toes, with enemies that only fully coalesce when one type of weapon is equipped, or floors that will hurt you if you aren't holding the same-colored weapon. More importantly, if you're quick enough, it's possible to involve three, four, or five different weapons in a single combo, and the game is constantly running a tally on the side of the screen rating how stylishly you're fighting, all the way up to triple-S.

The more style you rack up, the more new abilities and moves you can unlock (from a list of dozens), and since you lose a couple of letter grades every time you get hit, you're really incentivized to play as cleanly as possible. The combat isn't overwhelmingly hard on the default difficulty, though it isn't a cakewalk, but if you're really serious about this kind of game, play it on hard from the outset. There are another four difficulty levels waiting for you to unlock them after that. The game is built to be replayed repeatedly; you can jump back into any mission on any difficulty whenever, and there are plenty of places you just can't access without the right abilities the first time through. All of your completion totals get rated and slapped onto leaderboards if you want to keep up with how your friends are doing. In short, the between-mission trappings, the glue that holds the levels themselves together, feel thoroughly modern in this game.

Since all the action takes place in a demonic mirror world called Limbo, the designers get to go wild with the sorts of places you're fighting in, and the game is constantly turning your expectations (and the levels) upside down by placing you in skewed, exploded, or otherwise deconstructed versions of city streets, mansions, night clubs, and a few more unlikely environments I'll leave to you to discover. While this sort of level design has started to feel a little played out since games like American McGee's Alice made it popular ages ago, I was constantly surprised and delighted by the sheer, over-the-top inventiveness of the levels in this game. There's also a degree of grappling-hook-style traversal, and a few creative moments that emphasize the relationship between Limbo and the real world, that make the game feel like more than a constant stream of enemy encounters. And the game is absolutely awash in dazzling visual presentation. I won't go too deep into that, because it's better absorbed firsthand, but the broad and ever-changing color palette, the ways the level geometry explodes and deforms around you, the titles and overlays that pop up on the screen to enhance the action, all combine to make this game a great venue for its artists to display their talents.

I brought no personal baggage to Ninja Theory's take on Devil May Cry, having played and enjoyed the original game way back when but then steering clear of the series after its poorly received second entry. Whether you're a longtime fan (with an open mind) or a total newcomer just looking for a solid character action game, it's hard to imagine anyone feeling overly dissatisfied with this new game. It's almost wholly successful at what it tries to do, and seems like the start of a promising new direction for what was otherwise a nearly forgotten franchise. 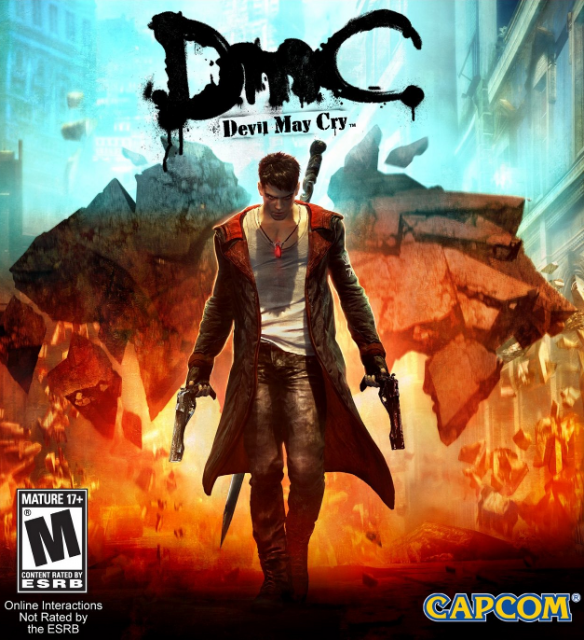