by Jeff Gerstmann on March 12, 2009
Share:TwitterFacebookReddit

Eat Lead: The Return of Matt Hazard is a dull, repetitive third-person shooter that attempts to get by on its sense of humor. The whole game, from the title (this is the first game featuring Matt Hazard), to its achievements, to some of its bosses, plays off of gaming's history and cracks jokes that people with a knowledge of games will get. The catch is that most of it isn't very funny. Matt Hazard himself is a sort of Duke Nukem-like gruff action hero. But Duke Nukem was already sort of painted as a comedic character, making Matt Hazard... a parody of a parody? While I could sit and dissect the game until we all go crazy, let's just cut to the chase. Matt Hazard's action is bad, but not bad enough to be funny. And the bits that are supposed to be funny aren't funny enough to make the bad gameplay excusable.
The story is madness. It seems that Matt Hazard (voiced by Will Arnett), gaming action hero, has been in games for the past 20 years. And it's time for him to make a comeback in a modern shooter. But there's a catch! The CEO of Marathon Software (voiced by Neil Patrick Harris) wants Hazard dead, so this whole game one big ambush designed to kill Matt Hazard forever! But... it's a video game! So... uh... what? I was totally unable to handle the logic leaps required to make the story work. At one point, the game pulls out to the "real world" to show you the evil CEO plotting Hazard's demise. But it's rendered in the same graphics engine used for the game. Maybe if the developer had gone all the way and shot a little video of actual humans for these bits, it would have gone down a bit more smoothly.
The story manifests itself in a way that makes the game seem like some sort of hyper installment of The Matrix. The game is constantly glitching as programmers insert more enemies and objects into the scene to take you down. And all of those enemies come from Matt's previous works, which means you'll fight a range of generic enemies, like cowboys, evil Russians, space marines, and cybernetic-looking troopers armed with water guns (from Matt's ill-advised kid-friendly water shooter). You'll even fight flat, 2D Nazis in an homage to Wolfenstein 3D, and they'll turn sideways to avoid incoming fire. It's kind of funny to see cowboys and Russians working together (for a change), especially when they're materializing in some kind of dance club filled with holographic dancing girls, but the enemy variety ends up being pretty weak. You see most of what the game has to offer in the first few levels, and from there it just becomes simple repetition with an occasional boss fight.
The game is a cover-based third-person shooter, with cover that will "de-rez" if it takes too many hits. Headshots are the order of the day, making the pistols key pieces of weaponry if you're a steady shot. You'll also find some fully-automatic weapons, a shotgun, a grenade launcher, a sniper rifle, some plasma weaponry, and some water guns, which are useful because they take out the water-gun enemies much faster than regular weapons. The actual shooting feels flat and the weapons really lack punch. You also have a melee attack. Other than shooting, hitting, and taking cover, there really isn't anything else, mechanically, to see. Hazard moves sort of slowly, so a dive or a run command might have been nice.
Along the way you'll receive assistance from a holographic lady (who exists in the "real world" in some form) known as QA. I kept hoping that the game would have you stop receiving assistance about a third of way through and claim that the entire QA department had been laid off. But the game's sense of humor doesn't really get too inside, beyond a quick crack about producers not actually playing games. Instead, it's usually really simple stuff, like an encounter with a guy named Master Chef, or a Mario gag. Most of the references are solid, but they aren't especially funny, either. Unless you think seeing a space marine in an armored chef's outfit is a scream. For me, the funniest part of the entire game is a boss fight against a parody of a Final Fantasy protagonist. From the pre-fight dialogue to the way his actions are selected off of a menu during the fight, it's a good bit of business that follows through on the concept's potential. There's also a good bit about an extra-long elevator ride.
So it's not entirely devoid of quality humor, but it's hard to call Matt Hazard a funny game. Will Arnett just sort of drones on in the lead role, which seems like a bit of a waste. That could have been anyone. The different AI enemies call out a lot, too, though I couldn't tell if having them call out that they were out of ammo was supposed to be deliberately bad or just, well, bad. Either way, a lot of the non-story dialogue gets repeated frequently.
It's a little weird to think of it this way, since the intents are so vastly different, but as far as recently released third-person shooters go, I think 50 Cent: Blood on the Sand is a far funnier game than Eat Lead: The Return of Matt Hazard. But that's just it. Humor is entirely subjective, and maybe some of the stuff I found to be a little easy and dull will get you going. However, I'm a lot more certain about the quality of Matt Hazard's gameplay, which almost feels like it's going out of its way to be mediocre at best. Hey, maybe that's part of the joke!
Jeff Gerstmann on Google+
Load Comments 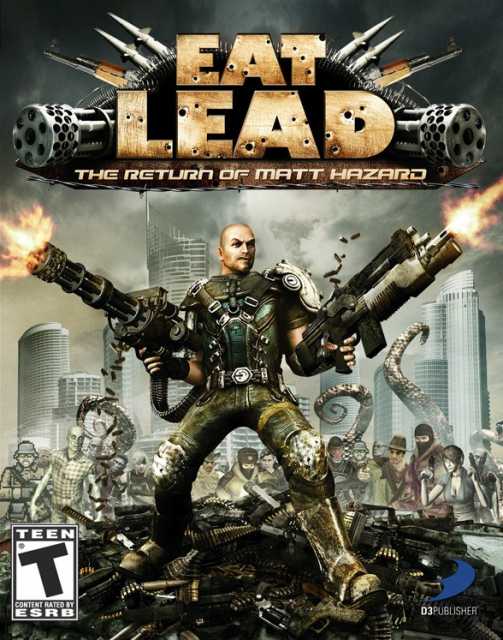