by Ryan Davis on November 2, 2008
Share:TwitterFacebookReddit

Guitar Hero makes an interesting, if not always successful, transition to the full-band format.

You can buy Guitar Hero World Tour in a number of different packages, but to get everything out of the game, you'll need to pick up the Band Kit, which includes the game, a guitar controller, a drum controller, and a USB microphone. Or, at least, you'll need a set of comparable controllers, perhaps ones you picked up alongside a previous Guitar Hero or one of the Rock Band games, most of which are compatible between the two series. There are some unique touches to the new World Tour instruments, and in some ways they're better than the gear that's already out there, but they also come with a few caveats.

The new guitar has a larger, more realistically defined body shape, along with longer strum and whammy bars. It has a new star-power button right below the strum bar, basically where your palm rests. You can still activate star power by tilting the controller, and while it might be an issue of an old dog and new tricks, but I still found this method easier and less disruptive to the gameplay. Similarly, the new touch pad on the neck of the controller allows you to perform specifically marked solos without strumming, but it's an interesting feature that I didn't feel compelled to use, mostly because the buttons work just as well, and because of the time it takes to switch between the two.

The drums are a bit more distinct, primarily because they have five pads instead of the four found on the Rock Band drums, with two of them raised up and shaped to resemble cymbals. I came in skeptical about how this new setup would work, but in practice it's terrific. The three main pads are bigger than the Rock Band pads, making it easier to perform two-handed rolls on a single pad, and the raised cymbals make it feel a bit more like an actual drum kit. The additional pad makes the gameplay more interesting as well, and going back to Rock Band's four-pad gameplay feels a little empty. From a strictly mechanical perspective, this is the best drum experience offered in a music game right now.

The thing that really keeps me from recommending the Guitar Hero World Tour gear wholeheartedly is an issue of build quality. It's anecdotal evidence, but there are a number of people experiencing issues with pad sensitivity on the drums, myself included. I had issues with my guitar as well, which suffered from an ear-piercingly squeaky strum bar and a touch pad which, after an exceptionally heated solo, would randomly trigger even when it wasn't being touched. It's the kind of stuff that I'm confident will get worked out as the manufacturing process for these new designs get refined, but for now, if your living room is already crowded with one set of fake plastic drums and you've got more rainbow-buttoned guitars than you know what to do with, you can probably get along without adding to the clutter.

Guitar Hero World Tour makes a few tweaks to the mechanics of the different instruments as well, with uneven results. On the drums, you activate star power by hitting both of the cymbals at once, a system that I found much more dynamic and strategic than the blank fills used in Rock Band. Similarly, you activate star power on vocals by either clapping your hand against the top of the mic or pressing a button on the controller, but here it feels more intrusive and kind of awkward. When you play as a band, you share your star power meter, which makes it easier to quickly build up star power, but I found that guitar players have a distinct advantage in being able to trigger star power quickly, making it easier for those players to use star power they didn't earn.

The introduction of new types of instruments begets some alterations to the Guitar Hero single-player format, though the progression remains familiar. The game is split up into individual instrument careers for guitar, bass, vocals, and drums, as well as a band career, which requires between two and four instruments to access. The careers are broken up into set lists of three to seven songs that you play consecutively, and the different difficulty levels have been incorporated so that you can now adjust your specific difficulty level between sets, but it's ultimately not that different from past Guitar Hero games. Consequently, it can feel a little too familiar at times, and it creates a sense of isolation between the different careers.

Most of the online modes in World Tour are similarly sufficient, if unambitious, allowing you to play against other players competitively or alongside them in an online band. The big left-field inclusion in Guitar Hero World Tour is the recording studio feature, which lets you create your own music, either by playing it live on the instruments, or sequencing it note-by-note. You can then upload to a central server for other players to download and play. I realize that user-generated content is all the rage right now, but the implementation here is too byzantine for most players, and the end results just don't sound that good. Even the catchiest, most interesting songs get buried by the game's cheap synthesized sounds, and everything ends up sounding like a clumsy MIDI file.

You can play World Tour as one of the cartoonishly archetypal characters from previous Guitar Hero games, or you can use World Tour's new character creator to make your own, oddly proportioned rock star. You get a lot of control over the details of your character's face, and there's enough variety in hair style and clothing options to style something unique. It would seem that one of the side effects of the new character creator is that all of the existing Guitar Hero characters have been remodeled, and they now look more like regular people wearing crazy costumes than they did in Guitar Hero III.

Throughout the career mode, you'll be joined on stage by the likes of Billy Corgan, Travis Barker, Ozzy Osbourne, Sting, Jimi Hendrix, Zack Wylde, Ted "Theodore" Nugent, and Paramore's Hayley Williams, and though they've been exaggerated to fit better with the overall art style of World Tour, they're generally pretty accurate. You'd think that all these real rock stars would make the experience feel all the more authentic, but the way the game uses them feels odd, particularly when they're pantomiming someone else's song. There's a real cognitive dissonance to watching Ozzy lip-syncing "La Bamba."

Stuff like that is indicative of the kind of slapped-together feel of Guitar Hero World Tour's presentation. While the Rock Band games have put a priority on knowing touches that make you feel like you're in a working band, Guitar Hero is more concerned with the fantastical, larger-than-life myth of rock 'n roll, and it lets some of the details slide. The venues are colorful and over the top with all the nuance and reality of a superhero comic book, and the band animation can feel stilted and mechanical at times. As a somewhat relevant aside, the game is pretty thick with conspicuous in-game advertising that accentuates a certain mercenary undercurrent in the game.

When it comes to song selection, Guitar Hero World Tour stays true to its name, with a slant towards songs defined by their guitars. There's a lot of crossover between Guitar Hero World Tour and Rock Band 2, both thematically and in terms of specific tracks, but World Tour leans more towards heavy metal and classic rock, exemplified by the inclusion of three songs by Tool and two each by Jimi Hendrix and Ozzy Osbourne. But it's a big track list, and it really does feature some terrific variety, with its most dramatic examples including the Beastie Boys' “No Sleep Till Brookyn,” Michael Jackson's “Beat It,” Willie Nelson's “On the Road Again,” Blondie's “One Way or Another,” and Sublime's “Santeria.”

It's all performed by the original artists, and in some cases, it's based on a live recording. For Jimi Hendrix's “Purple Haze,” you get some winking lyrical changes and a woolly, improvised guitar solo, though “Kick Out the Jams” by MC5's Wayne Kramer gets lost in the live distortion. There's something more cohesive and critically pleasing about the song selections in the Rock Band games, but Guitar Hero World Tour feels a little more populist, and is still plenty of fun to play. As far as downloadable tracks go, the game launched with a few track packs and the full Metallica Death Magnetic album available for purchase. So far, Activision doesn't seem quite as committed with the downloadable content as Harmonix has been with Rock Band, though it's definitely been ramping it up.

There are some notable feature differences between Guitar Hero World Tour and Rock Band, and the attitudes are wildly different, but a lot of that feels a little academic in the grand scheme. Guitar Hero has some catching up to do when it comes to the full-band experience, but all the debatable points shouldn't keep you from rocking out.
Load Comments 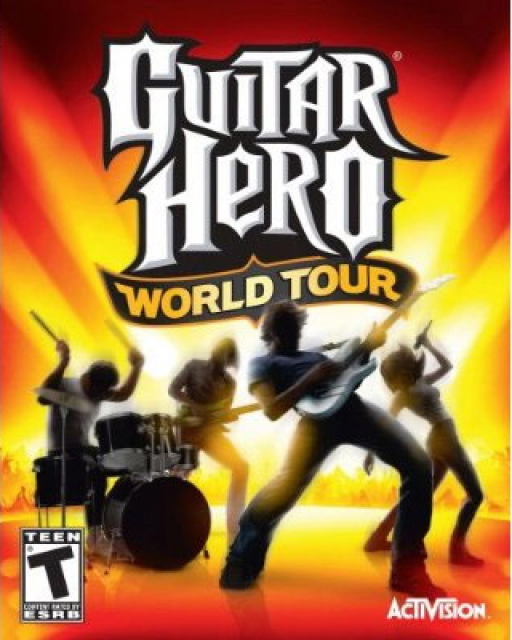