by Ryan Davis on November 5, 2009
Share:TwitterFacebookReddit

The Rabbids get a fresh lease on life by abandoning the minigame format that they're known for in favor of a single-player experience that still capitalizes on both their oddball charm and the unique capacities of the Wii.


Since their introduction as foils to The Limbless One in Rayman Raving Rabbids for the Nintendo Wii, I've maintained a baseline of fondness for the Rabbids, even after I had lost interest in the increasingly familiar minigame collections in which they almost exclusively appeared. It's an affection I find challenging to articulate without referencing past masters of idiots, explosives, and falling anvils like Looney Tunes, or Joe Dante's Gremlins. There's just something about their free-spirited enthusiasm for madness that I either relate to or secretly envy.

So it pleases me greatly to see these manic, furry little agents of chaos trying something new in Rabbids Go Home. Comparisons to Katamari Damacy are somewhat apt here, in that both games revolve around celestial aspirations and garbage collection, but the more significant parallel is the way both games carry a deep-seated quirkiness inherited from their country of origin. In the same way Katamari threw off surreal waves of distinctly Japanese peculiarity, Rabbids Go Home exudes a dizzy European flavor. It's a madcap, screwball game that will probably prove more pleasing to the palette in small tastes than in heaping mouthfuls, but it's still a giddy ride from start to finish.

The underlying premise in Rabbids Go Home is that, having spent the past three years gleefully tormenting the uptight, rule-abiding citizens of Earth, the Rabbids are ready to pack it up and head home, which they seem to freely assume to be the Moon. Apparently lacking the knowledge of how they got here in the first place, the Rabbids tap into the pit-black depths of their ridiculousness and figure that the best way to get to the Moon is to build a giant pile of, well, whatever they can find. And so, a team of enterprising Rabbids grabs a shopping cart and heads out into the world of man, grabbing anything that's not bolted down, regardless of size.

You'll guide this whirling dervish of wobbly wheels and constant, unnecessary screaming through a series of levels set largely in institutions of suffocating banality, such as office buildings, hospitals, airports, grocery stores, and the like. It's a world populated with timid, fearful humans whose frail, boxy frames betray literally just how “square” they all are, and a considerable amount of the fun of Rabbids Go Home comes from the joy of watching and listening to the normals freak out at your antics. The levels are also filled with stuff, and that stuff is divvied up into two size-based categories. Most of what you'll find on the ground--which includes, but is not limited to, octopi, dogs, pigeons, bats, soda bottles, fire extinguishers, toy cars, transistor radios, answering machines, and so on--falls under the XS (small) category. Additional XS stuff can also be found hidden in bushes, soda machines, and the like, and you can use the Rabbids' “bwaaah” attack, as well as a dash attack you learn later on, to knock the clothes clean off a person's back and add it to your coffers.

Your goal is always to get from one end of a level to the other, collecting as much XS pile-fodder as you can find, though most levels also feature a single XL (large) article to collect as well. Sometimes the XL stuff is just a big-ass thing to be collected at the end of the level, like a piano, a statue, a high-dive board, or a cow. Others will give you additional abilities, such as a jet engine that lets you rocket through airport terminals at high speeds, sucking up anything in your path, or an oxygen tent--complete with a feeble, liver-spotted patient inside--which you can use to float your way across otherwise impassible gaps. While most humans run screaming at the mere sight of the Rabbids, there are dangers to be avoided, including guard dogs, cacti, explosive inflatable bumpers, and several varieties of rubber-suited Verminators.

The style of the gameplay in Rabbids Go Home doesn't easily conform to anything you've played before, and while the item collection concept remains a constant, unique twists are regularly introduced to keep it fresh. Sometimes you'll be presented with a time limit to race against as you try and collect as much stuff while still making it to the other end before time runs out, making it feel a bit like a racing game. Other times, it feels more like a platformer, with the challenge coming from simply navigating serpentine platforms and dangerous obstacles. You'll do some light puzzle-solving as well, such as figuring out how to use a trail of pea soup to get a janitorial robot to create passage to the next area.

If the gameplay was the defining characteristic in Rabbids Go Home, it really wouldn't be much to write about. It's got a snappy pace to it, and it rarely gets hard enough to kill that momentum with frustration, but it's the free-wheeling insanity of the Rabbids that makes this game so easy to like. The manic behavior of the Rabbids is reinforced by a desperate brass band soundtrack that sounds like it was conducted by John Philip Sousa on a piping-hot speed bender, which contrasts nicely against the occasional bits of corny licensed music that you'll hear the humans listening to. Suffice it to say, John Denver is well-represented there. The shopping cart careens everywhere it goes, with the stuff you've collected swaying about precariously as you turn. The Rabbids' innate curiosity will occasionally bring the game to a halt as they take comic interludes to poke and scream at some particular bit of whatever they've picked up.

Some of the most amusing stuff in Rabbids Go Home, though, has almost nothing to do with the actual gameplay. For example, you'll earn gifts on each level based on what percentage of the available stuff you collected. These gifts mostly unlock new tattoos and accessories you can adorn your Rabbids with, but rather than just dump you to a character customization menu, you'll suck the Rabbid you'd like to customize into your Wii Remote, at which point the perspective cuts to the inside of your controller. You can then shake the Wii Remote around to watch the Rabbid knock against the walls, shake it off, and happily wait for more abuse. It's a surreal, metatextual touch that's totally superfluous to the gameplay, yet it's a key example of the kind of clever insanity that permeates Rabbids Go Home.

It's fair to say that Rabbids Go Home is a pretty shallow experience, and I'm uncertain if the novelty of the formula can support the weight of annualized sequels. But these facts do nothing to diminish the fact that I spent nearly the entire eight-or-so hours with the game wearing a stupid grin on my face, probably looking something like the Rabbids on my screen.
Load Comments 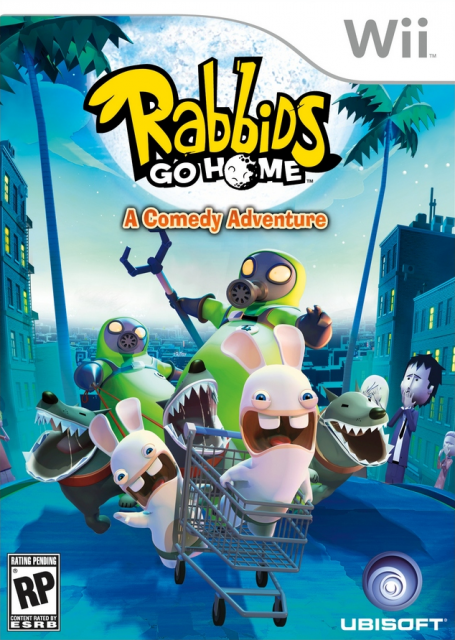