by Brad Shoemaker on March 16, 2013
Share:TwitterFacebookReddit

If you're still at all invested in keeping up with StarCraft II, there's no reason you shouldn't have Heart of the Swarm.

StarCraft II: Wings of Liberty was such a throwback to its seminal but aged RTS predecessor, it's fitting StarCraft is one of the few franchises still being extended out in the spirit of the old '90s boxed PC expansion pack. Heart of the Swarm is the first such add-on to StarCraft II, a robust $40 package that, quite frankly, gives you more StarCraft II in every way. At the risk of sounding overly reductive, if you spent any time at all with Wings of Liberty, you already know exactly how excited you should be to play Heart of the Swarm, or even whether you should play it at all.

StarCraft II might as well be two separate products in one box: the story-driven single-player RTS campaign, which is self-explanatory enough that anyone can play it, and a multiplayer mode so wildly fast-paced and complex that it's arguably the hardest video game, if not one of the hardest competitive activities period, to excel at on the planet. Luckily for everyone who wants to avoid falling down the multiplayer rabbit hole, Blizzard made the wise decision with Wings of Liberty to largely differentiate the content of the campaign from the multiplayer mode. That philosophy continues on here, giving you a new set of story missions centered around Kerrigan and the Zerg that's just as varied in design as the Terran campaign in the previous game.

At two-thirds the price of Wings of Liberty, it shouldn't be surprising that you get about two-thirds as many missions here, but each one features distinctive enough mechanics, objectives, and new units that your progression through the story is thoroughly satisfying. Just like in the last game, there's never an objective as simple as "build a big base and then go blow up the other guy's base" (and there are expanded options for skirmishes with AI if that's what you want). Each level places some interesting twist or restriction on map control, time limit, the way you acquire units, and so on, in the same style as the last game. If you've been playing multiplayer since that game came out, you'll find the campaign disappointingly easy on anything but the highest difficulty. But with that mission-to-mission variation and a nicely designed, multi-tiered upgrade system that might be more satisfying than in the previous game, this campaign here is just as much fun as the last one.

For better or worse, Heart of the Swarm's storytelling picks up and runs with the same tone and elements established in Wings of Liberty, which is to say there's way more focus on prophecies, artifacts, ancient aliens, and the somewhat out-of-left-field romantic cheese between Kerrigan and Jimmy Raynor, and less on the backstabbing, intrigue, and factional maneuvering of the old StarCraft games. The plot is moderately successful at creating a redemptive arc of sorts for Kerrigan, which is good since you're playing as her in this add-on, though some of the dialogue between Kerrigan and Raynor is laugh-out-loud goofy. Some other aspects of the campaign story are a bit ridiculous and hackneyed as well, and if you've played many Blizzard games it's easy to predict exactly where this whole trilogy is probably going to end up. But there are also a handful of neat, nostalgic callbacks to the story of Brood War, and I found quite a few of the supporting characters to be pretty likable. There's also what feels like more of Blizzard's best-in-class CG cinematics than there were in Wings of Liberty. There are worse video game stories out there, and it's a lot easier to forgive since the single-player game is so much fun, but at this point the overall plot arc of StarCraft II is a bit easier to enjoy if you don't take it too seriously.

At any rate, StarCraft is on the very short list of games whose multiplayer modes have far surpassed their story campaigns in popularity, so if the updates on the multiplayer side weren't up to snuff, this whole expansion would be pointless. While it will take months for the true usefulness of the new units and changes to become clear, my initial impression is that the all the new stuff is going to provide a serious kick in the pants to the metagame, which had gotten stale enough to make me pay little or no attention to the game at all for several months. Most imporantly to me, the Protoss finally have a valid tech path through the Stargate, between the new support/harass flier the Oracle and the long-range Tempest, that frees them up from needing to go straight to a Robotics Facility every single match. And the defensive Mothership Core lets you expand early on without quite as much fear of a rush shutting you down before you get started.

But wait, there's more! A lot more. The Terrans get some important close-quarters capability (and a nod to the old Firebat) with the Hellbat transformation mode for the Hellion, and the new hidden Widow Mine provides some really annoying defense and containment options, since the mine doesn't actually destroy itself upon firing but has to be taken out manually. (It helps to know about this before you go up against a mined ramp). The Zerg's new flying caster the Viper and burrowed siege unit the Swarm Host should give the creepy-crawliest faction some extra options in engagements and increased map control, respectively. I'm just starting to get my head around all this stuff in competitive play, but I can confidently say the new dynamics these guys are bringing about are already enough to get me interested in playing multiplayer again.

Ever since I randomly lucked into the beta for Warcraft III before my time in the games press, I've deeply admired Blizzard's take-no-prisoners approach to RTS balance, and Heart of the Swarm shows they still aren't afraid to make cuts and deep changes wherever appropriate. In that sense, the modifications to existing units may be even more important to the longterm health of StarCraft II than the new units. The overly powerful Terran Warhound from early in the beta is gone, while the Carrier, long subject to removal, somehow managed to survive through to the shipping game. Void Rays don't charge up anymore, but have an active ability with bonus damage to armor instead. The underused Hydralisk, a mainstay of the Zerg army in Brood War, finally has its speed upgrade back. The infernal Medivac also gets a speed boost with an awfully short cooldown. A speed boost? Like Terrans needed any help dropping your expansions? While each faction only gets two or three all-new units, there are so many changes across the board in this expansion that it practically feels like playing an entirely new game. And that's very exciting.

Blizzard has done quite a bit of work to the StarCraft II client interface, bringing all the content in Wings of Liberty and Heart of the Swarm together into a common interface that will clearly also house Legacy of the Void when it ships a decade from now. The single most important change, which will be new to you if you're just coming back to the game, is an unranked matchmaking option that lets you play against opponents of similar skill without any impact to your all-important ladder standing. This is a much-needed way to get back into the rhythm of competition or play off-race without any sort of ranking anxiety. There's also a new experience system, not dissimilar to that in most shooters these days, that lets you level your way up to new profile portraits and decals. You earn a little experience even when you lose, which ensures everyone will be able to unlock at least a few things. Some of these improvements are also retroactive to Wings of Liberty and thus aren't exclusively part of this expansion package, but they still make the whole experience more enjoyable. If you haven't played StarCraft II since the original came out, every last thing about it today feels different in some minor or major way.

The traditional expansion pack is such a rarity these days that in reviewing one, it's tempting to suspend our standard graded rating system in favor of a binary "buy it or don't" recommendation. If the occasionally cheesy storytelling or slavish adherence to resource-gathering and micromanagement put you off of Wings of Liberty, there's nothing in Heart of the Swarm that will bring you back in. But for those of us who still deeply love this specific style of real-time strategy and want more of it, this is a must-have add-on. 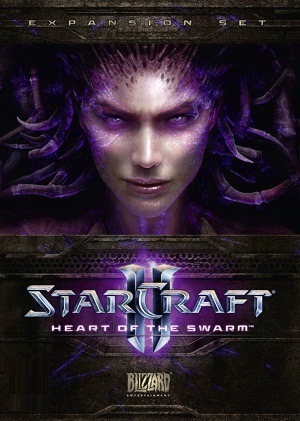