by Brad Shoemaker on October 12, 2009
Share:TwitterFacebookReddit


Uncharted 2: Among Thieves is unafraid to be exactly what it is: a big, rollicking summer popcorn flick of an action game, a finely honed piece of thrill-a-minute pop entertainment. There are no pretensions toward dramatic gravitas or new gameplay tricks, just a relentless drive to be as exciting, larger-than-life, and fun at every moment as it can possibly be. And you know what? At meeting that particular goal, this is the single most successful game I've ever played.

Naughty Dog has improved on every single aspect of the first Uncharted, a game that built a great blueprint out of components taken from other properties-- Gears of War's cover-based shooting, gymnastic traversal a la Tomb Raider, the swashbuckling treasure-hunting of Indiana Jones--but then failed to add those parts up to a whole that surpassed its own inspirations. Uncharted 2 fulfills all of that potential and then some, with better drama, better shooting, better graphics, better moments. Better everything. It's not that this game does anything particularly new, it just does what it does with a higher degree of presentation and polish than just about anything on the market.

Uncharted 2 turns on the strength of its story and characters; none of the game's numerous mechanical improvements would mean much if Nathan Drake, equal parts Indy and John McClane, weren't such a relatable and likable guy. Tough-talking but good-hearted, the guy absorbs an inhuman amount of physical punishment in every scene, and does it with a smirk and a one-liner. All the characters fit into some sort of action-movie archetype. Cigar-chomping old Sully and field-reporting love interest (and now heartbreaker) Elena are back from the first game, filling their respective roles as mentor and romantic foil the same as always.

New this time, there's Drake's sleazy British counterpart Harry, and a psychopathic warlord named Lazarevic who's way more frightening and sinister than any of the first game's villains. Then there's the game's best new character Chloe Frazer, the sultry, husky-voiced thief who has an eye for Drake but whose motivations are never completely clear. She serves as one-third of the most believable love triangle I can remember seeing in games, a medium that isn't exactly known for its realistic depictions of romance.

The story here has the crew hitting locations like Turkey, Borneo, and Nepal as they retrace the steps of Marco Polo in a search for the mythical kingdom of Shambhala and a priceless Buddhist artifact thought to be hidden there. The premise is pretty boilerplate treasure-hunting stuff, and best serves as a vehicle for the wonderful interactions you get between the characters, which must have been facilitated by the recording of the voiceover and motion data simultaneously between the actors while they were in the same room together. The result is, these characters also feel like they're in the same place together, riffing off of each other, responding to body language or a raised eyebrow, genuinely interacting. It all feels about as real as I've seen in video game cinematics, and though the lines aren't the work of Shakespeare (and don't need to be), they achieve exactly the sort of tone and emotional response you need to appreciate this sort of lighthearted action story.

You do need some interesting ways to occupy yourself in between expository cutscenes, of course, and this is where Uncharted 2 feels both the most improved over its predecessor and the most impressive in its own right. I have to mention the gigantic setpiece action moments right upfront, because those are the scenes that will stick with you long after you've finished the story. You're engaged in a pitched gunbattle on top of a speeding train. You're frantically fleeing down a tight alleyway from a pursuing jeep. You're playing cat-and-mouse with a tank that's methodically obliterating every piece of cover around you. You are continuing to trade fire with enemies inside a building that, under a hail of missiles and gunfire, is quite literally collapsing around you.

You're in control of all these moments. The sorts of action scenes that other games might relegate to prerendered video are the bread and butter of Uncharted 2's most exciting playable sequences, and they come at you frequently. Sure, plenty of games before this one have dropped you into similar impossible scenarios, but they've rarely done so with the sort of cinematic flair that colors nearly every minute of Uncharted 2. You get the sense that some designer at Naughty Dog studied every minute of this game intently throughout production, constantly asking "How can we make this part more awesome?" It feels like there's no end of inventive camera moves and angles, unexpected special effects, and smart, directed visual design all drawing your attention to exactly how incredible the action is. These sorts of thrills are hard to describe in words; you need to see them yourself to get the effect. But to show them to you would be to rob you of the joy of playing them firsthand. So all I can say to you is: Play this game. You won't be disappointed.

On a more basic mechanical level, I should note it's actually a ton of fun to shoot at and punch people in this game, in contrast to the first game where the shooting sometimes felt laborious and the melee combat was awkward. The shooting has been tightened up considerably in the sequel, with more and better guns, some much-needed changes to the grenade-throwing, and enemies that don't soak up a dozen bullets before they finally go down. The melee combat has been made simultaneously easier to handle and flashier--Drake has a huge number of hand-to-hand ways to take down enemies--and sneaking around to take out enemies stealthily is actually a viable option in a number of scenarios. Rather than an obstacle to unfolding the story, Uncharted 2's combat is a highlight of the game.

It's good enough to support a surprisingly robust multiplayer mode, anyway. With its cover-based setup, Uncharted 2 multiplayer ends up feeling a bit like Gears of War, with a similar priority on fighting up-close, melee attacks, and grenades. But the traversal mechanics from the campaign carry over here to let you climb, crawl, and shimmy your way up and down the maps, giving you more mobility than you'd ever see out of Marcus Fenix and enabling some quick escapes during intense action.

I had the most fun with the game's cooperative modes. These are limited to three players, which I'd like to think was due to a conscious design decision and not technical limitations. The arena is the best, rawest demonstration of the game's combat, as it subjects your team to 10 increasingly harrowing rounds of encroaching enemies in the style of Gears' horde mode. There are also three standalone co-op scenarios adapted from the single-player (each with their own brief cinematics and unique voiceover) that let you fight tons and tons of AI enemies while moving from point A to B, rather than holing up in a single defensible position, as you do in the arena. Both modes are a blast, and can get painfully, ridiculously busy and difficult at the higher levels. But it's a good sort of hurt.

There's plenty of great competitive multiplayer in here too, with a number of small-team objective modes based on the sorts of game types you see in most multiplayer games, focusing on delivering an item to a capture location and that sort of thing. The online mode has a full character progression system a la Call of Duty that lets you rank up and access weapon upgrades, new character skins, and "boosters" (perks) that modify all sorts of little variables in your gameplay, like reload speeds and how much experience you gain. The multiplayer progression is really smartly designed, with separate upgrades that go toward the competitive and cooperative modes, so you can specialize in the game types you like playing more. These upgrades are in addition to the typical single-player unlockables you get with a Naughty Dog game, including new character models, visual filters, and some nicely produced behind-the-scenes videos. This is an incredibly complete package, overall.

I'd have to reach to offer any significant criticisms of this game, because none readily present themselves. You might end up ducking behind the wrong cover or grabbing the wrong handhold once in a while, I guess. (There, are you happy?) Naughty Dog set out with a very specific goal in mind, and in focusing intently on that goal, they blew right past it. Uncharted 2 is a sublime example of how to make a great action game, the result of fantastic execution on every aspect of the game's design and development. It's the best, most memorable game I've played in a long, long time.
Brad Shoemaker on Google+
Load Comments 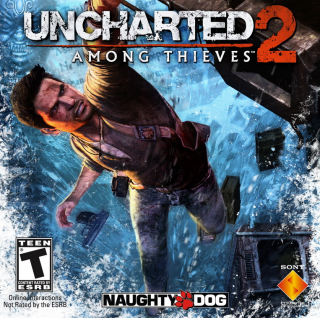