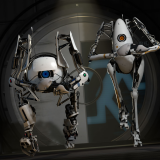 I could listen to Peter Moore talk all day. That guy is one hell of a story teller and his bit about meeting with Ballmer over Red Ring of Death is fascinating.

THQ Pack with Warhammer 40k Space Marine, Metro 2033, Stalker: Shadow of Chernobyl, and Homefront (which has not and will not be installed).

Yeah, they whole not being impressed that Master Chief somehow managed to survive four years in a busted ass ship floating through space seemed really odd. Also, I believe the radio chatter you hear in the last level references multiple ships in the defense of Earth, I think they were called Battle Group Dakota or something, I can't remember.

I just found the story in general to be pretty flat. There were no real high points except maybe the trench run in the broadsword fighter, which I thought was pretty dang awesome. Aside from that I just found the pacing way too fast and the story lacking supporting characters. Seriously, there's practically no one in this game. Sure Lasky and Del Rio talk a fair amount, but I never cared for them or thought much of them.

Playing this really reminded me of why I enjoyed Reach so much. The slow build up in the beginning and characters that I thought weren't entirely disposable (although I know plenty of people who would disagree with that, and I see where they're coming from.)

But yeah, I thought the game played extremely well, there just seemed to be a lot of missed opportunities. Also, 343 really likes Mass Effect apparently.

So, I guess this means no Rise of Nations 2. Dammit.

If you have had even the slightest presence on the internet since last Friday you have undoubtedly heard rumblings and fervent word of mouth about The Elder Scrolls V: Skyrim. Like so many have already said (and judging from the huge word of mouth, also experienced) Skyrim maintains to be a world that is both vast and dense. That density has no limits either, Skyrim is a place where people live, it is a place with problems and emotions, and it is a place with history. More than any game in history Skyrim does not make a video game world feel realistic, it instead submerges you in the lore, the history, and the tensions so much to the point where you become a part of it. Doing things in Skyrim feel natural because you feel so involved and connected to the life-like world around you.

The vastness of Skyrim is equally as impressive. The landscape is varied and remains visually distinct. From run-down forts left behind by ancient empires or dwarven ruins basked in mystery everything in Skyrim has a style that resonates with you. In terms of raw size the land of Skyrim is truly huge, and because of that journeys on foot take time and are genuinely perilous. It is a hostile world dotted with dragons, giants, bears, and bandits. Survival requires work, but is by no means punishing, staying on your toes and quicksaving often is the recipe for success.

As of this writing I have logged 20 hours into Skyrim, a number unusually high for a person like me who generally tries to finish games as quickly as possible. In that 20 hours I have raided dungeons, fought dragons, and taken up arms in a civil war that's tearing the country in two, all while only barely (and I mean barely) touching the main story. The amount to do in Skyrim is staggering, especially when you consider the overall quality of each quest line. Every mission finds someplace new to go, adds a unique insight to the lore, or is just plain fun from a gameplay perspective. One such example is the civil war quest line, which requires you to join sides with the rebellious Stormcloaks, trying to keep Skyrim true to its Nordic roots, or the Imperial Legion, working to preserve Skyrim as a member of the Empire. Each side has it's own motivations, ranging from political to religious, and the game does an astounding job of exposing you to each side in its opening hours. When you do finally choose who to side with you are tasked with joining the fight, which means large scale battles involving dozens of characters, espionage, and small unit raids on remote enemy camps. It is fun, interesting, and completely independent from the main story.

Skyrim is a fantastic experience that should be experienced by all. It makes for a unique bookend for this generation of consoles, looking back to Oblivion (2006) we see how far games design and technology has advanced in the past five years. Skyrim is a game that will be enjoyed and remembered for a long time, in a way only few games have ever amounted to.

Ha I have been doing the same thing, HDStarcraft has some good youtube videos too, his are pure commentary on matches but they are very informative for newer players or people who haven't played SC in awhile.

Yea Halo Wars is a very fast paced RTS, it's pretty simple and the battles are always fun to watch.