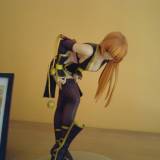 Obviously I want to recreate this "famous" scene, as I always ask myself "why is there straw" when running through tuscan cities in AC2 :D
11 years ago

I hope anyone here got the possibility to capture a screen from AC2 for me, as I don't want to wait for this opportunity, till the PC-version is released.

I'd need a  screenshot showing the following composition:
Eizo standing between a courtesan and a heap of straw, with some headroom for a caption.

It would be nice if the camera is turned around, so you can see their faces.

Well, so we are already knee-deep into the season, and what have I been up to?

I was on holiday :)
Spent the last 3 weeks in south africa, which is a pretty awesome place to be. But I guess none of you is interessted in my travel-stories...

Before I left I bought "Brutal Legend" and gave it to a friend. As well as the cash to buy me "Dragon Age".
when I came back, he gave me "Brutal Legends" and sayed "You'd have to wait for Dragon Age till I am finished.." Fair enough.

As exchange he gave me "Divinity II - Ego Draconis" ... I guess, the game hasnt' been published in the US yet, as it was developed by a european studio.
I just wanted to 'test' the game, so I could return it to him quickly and then focus on some heavy-metal-head banging-action with Jack Black ... but now I am about 8 gameplay hours in and quite like the game. It's a lighter version of Oblivion to me .. plus you can transform into a dragon (which i haven't done yet, I am still early in the game).

Anyway, it's only a filler to me, as I preordered the white edition of "Assassins Creed 2" which I expect to get by weeks end.

So, I should be quite busy. AC2 comming up, currently playing Divinity 2. Brutal Legend & Dragon Age already bought. Left 4 Dead 2 is released the following week. A friend of mine finally finished Fallout 3, which he will borrow me now...
Oh, and I still think about buying "Panzer General" (XBLA) ... that's my kind of game.

DS-wise I finisehd "Professor Layton and Pandoras Box" during my holiday. Awesome game.
Scribbelnauts kinda lost me ...
And I am still waiting for that Heroes of might and magic-game, with the puzzle-quest-style gameplay...

I don't see how I can fit all this into the last weeks of this year. And the next year is already filling up with games for me ... Mass Effect 2 has already been preordered :D

...but there is no team in Battlefield either.

Do you know the feeling, if you wanna love something/somebody, but feel like everyone is trying to put you off?
Well, that's the way I feel about Battlefield 1943.

After playing about 12 hours, I start to hate the game. Well, not the game, because it's fun. But the people playing the game ...who are just sucking the fun for me.
First off, I think it's save to say, that Battlefield games are Team-Games. It's about winning as a team, and more importantly to play as a team to achieve that.
But most people playing Battlefield 1943 are playing a deathmatch-game. I often think, that they just don't get what the game is about.

So not only most of them just run around firing in the air, if there is no other target in sight. But most of them do so, out of a squad. Which doesn't help the cause. I just finished a set of 3 games, where there were no (0) squads in my team.

This behaviour is starting to annoy me a lot. When people just wait at the base for the plane to respawn. When they storm away, though they should help defend the flag. When they are in the gunner position in a vehicle and are either shooting trees heating up the gun, so they can't fire at enemies, when they pop up, or worse not shooting at people in our back firing at us.

Another interessting question is, why no one ever uses his headset? Is there no support for it, like there is in every other game? As none of my friends are playing this game, I can't find out. Because whenever I am in a game, no one is talking or responding ..and usually you can't focus on any game because of these chatterboxes on Xbox Live.

Well .. as I don't have another game at the moment I like playing as much as Battlefield 1943, I see myself going back to this abusive bitch as often as I can. But I don't like it, like I used to...

Well, I guess there is quite some recaping to be done.
For more then 3 months I had no Xbox, as something went haywire with the repair. It wasn't even MS fault, but the shop I bought the Xbox at (worse, I was an employee there back when I bought it).
Anyway about a month ago, I got a new X360 as MS couldn't repair it (or didn't want to *g*).

So the last weeks I spent playing lots of Civ Rev, and once again tried killing Bane in Puzzle Quest. I tried tons of demos aswell, as I missed quite some games since march.

Last week I bought "Kingdom under Fire: Circle of Doom" for 10 Euro. I loved "KUF: Crusaders", as I am a huge RTS-Fan. When "KuF:CoD" was released the mediocre review-scores and the fact, that it's just an Action-RPG anymore, put me off. Now for 10 Bucks I felled compelled to give it a chance. I only spend a few hours with the game so far, but it's quite entertaining. The story is a little confusing, and it's item "synthesizing"-System even more so. But you know the pleasure of hacking through legions of enemies and getting loot, and I am a bitch for that :)

What keeps me from playing is that, after 2 weeks of pondering, I finally bought "Battlefield 1943". I just love the BF-series.

Bigger news are that I switched from my X360 premium to a X360 Elite 3days ago. A friend of mine finally decided to jump the train, and get an Xbox. When he asked me aboud advice, I offered him my system for 150 Euro. As I got a new Box just recently I could do so without feeling like ripping him off.
I am planing on buying a new TV-Set within the month. I guess I am giving it to me as a birthday-present, which is looming at the end of august :)

If you're playing BF 1943 give me a shout. I am still looking for a good squad to roll with :)

That's it for now.
Happy gaming everyone!

the water-thing disturbes me most...
the best about this movie, is the way they spoofed it in "Scary Movie 3", with the scene of Mel Gibsons / Charlie Sheens dying wife and M Nights character asking for a ride :)
12 years ago

@Ryu: I already had a X360 RROD'ing on me in 2007. Back then, I got it repaired in like 3 weeks. Looks like MS just got lots of repairs at the moment, probably as that E73 and E74-failure have been acknowledged as being under longer waranty. Might just be a problem in europe or austria as well...

After some phonecalls I got some new information regarding the status of my X360.

I got news that Microsoft is waiting for some parts for the repairs, and "at the moment repairs take up to 3 months"... I have no idea, if that means I'd have to wait another 3 months, or if this includes the 6, 7 weeks my 360 is gone already.
Anyway, I guess it just takes way more time, then I care...
I wonder if that's just a problem they have around here, all of europe or even world wide.
I guess that also means I got more time to spend with Disgaea DS ;)
As long as the 360 returns in time for Assassins Creed 2 im fine ^^
12 years ago

I still have my GBA SP, but what's the use of having to carry around severall handhelds? It's like carrying around a digi-cam, MP3-player and Cell-phone ..when the cell can be used for all 3 purposes...