by Jeff Gerstmann on March 3, 2010
Share:TwitterFacebookReddit

Bad Company 2 is a terrific multiplayer shooter that offers the scope and strategy that made the Battlefield series so great in the first place. The single-player, however, feels a little flat this time around.


Battlefield: Bad Company 2 builds off of the previous game by adding more multiplayer options and refinements and delivering a new single-player campaign. As someone who happened to enjoy the previous game a great deal, this is a fantastic thing. But the single-player campaign, despite offering a lot of the same charm and character that made the first Bad Company so memorable, doesn't pack the same punch the second time around. Sure, the wholesale destruction of buildings has gotten a bit better, but it feels like you aren't put in enough situations to actually take advantage of that fact on a regular basis. Instead, it feels like building additional multiplayer modes and refining that aspect of the game was a priority, and multiplayer fans should find those changes to be quite exciting.

The four guys that make up Bad Company are some of the greatest new characters to come out of this generation of console hardware. There's a natural sound to the voicework that makes them seem like some regular guys thrust into some pretty messed-up military maneuvers. Last time around, they broke ranks and attempted to steal a truckload of gold. In fact, the ending of the first game implies that they got away with some of that gold, too. But there's no mention of the gold in Bad Company 2. In fact, the events of the first game aren't really referenced at all during the main story. Instead, the same four guys are sent after a mysterious super-weapon that dates back to World War II, which makes a guest appearance in the game's prologue level before things get going in modern times. After a brief stint in Alaska to set up some of the action, B-Company is transferred into a special ops division and sent off to Bolivia. There's a bit of globetrotting going on between missions, but the core mission of finding out more about this secret weapon and stopping the people who would hope to uncover its secrets and use it against the United States remains the same.

Though you stick with your squad throughout the game, you don't often feel like you're fighting right alongside Haggard, Sweetwater, and the Sarge. After battles cool down, they seem to stand around, and it feels like they're warping ahead of you when you start running to the next checkpoint, just to make sure that they're in position for any scripted sequence or dialogue that may come up. Overall, I felt pretty disconnected from a lot of the action, and the campaign often felt pretty mindless.

However, a lot of that is because I wasn't stopping to let the environment and the squad sink in. There's a fair amount of incidental dialogue from your squad in Bad Company 2, but since they tend to stand still and not stick with you whenever there's no fighting going on, it's very easy to miss. If you stand around with the guys for a bit, you'll hear some hilarious exchanges, with jokes usually made at the expense of Haggard, the Texas redneck of the crew. In one moment, he'll attempt to tell the team that he's fluent in Spanish... or Spanglish, at least. But then he'll refuse to actually speak it. In another, he'll comedically brush up against the edges of racial sensitivity by asking the Sarge why "Afro-Americans" pronounce the rapper's name as "Fiddy" Cent instead of "Fifty." In yet another, he'll talk about how there are parts of his brain that could certainly use some washing. They'll debate the existence of God and what makes a man eligible to go to Heaven. At one point one of them will talk about the "big bong in the sky." The characters talk over each other and interrupt one another in a very natural way that sounds more like a movie scene than a video game. But the main story dialogue, by comparison, is extremely on-task and usually very dry. It's also received a liberal sprinkling of Generation Kill-inspired mil-speak, just like Modern Warfare 2, so expect to hear more than a few "Oscar Mikes" in there. And unless you make it a point to wait around for those incidental moments to trigger--and they don't seem to always pop up in the same place--you're going to miss the best part of Bad Company 2's approximately seven-hour campaign.

The action in the campaign feels flat in spots. The big thing about the first game was the introduction of destructible buildings and other covered positions. Walls blast apart beautifully when you launch grenades into them, and using a tank to decimate everything around you can be satisfying, as well. All of that returns for Bad Company 2, and you can now hit some buildings so hard that they collapse entirely. But the areas you're fighting through often don't take advantage of those strengths. There aren't many situations where you're given enough explosive hardware and enough nearby buildings to really tear the scenery apart, and it makes Bad Company feel a little less unique in the process. You'll move from point A to point B, shooting down everything that gets in your path. You can't absorb a ton of punishment, either, so you'll have to play fairly conservatively in hectic situations. Primarily, it just doesn't feel as wild as the first game did, even though it pushes many of the same buttons along the way with tank battles, a few spots where you're firing from mounted weapons on helicopters, and so on.

Meanwhile, the multiplayer side of Bad Company 2 feels like it got significantly more attention during the development process. To the casual onlooker, the differences might not seem enormous, but if you got up close with the first game and stayed there for a good length of time, you'll definitely appreciate the new modes. Conquest mode, which was released as an add-on for the previous game, comes stock now, and you can also play in squad deathmatch mode, where four teams of four players each fight it out until one squad gets 50 kills. There's also a mode called squad rush, which plays like a speed round of the standard rush mode for up to eight players. In squad rush, the attacking team only gets 20 tickets, but there's only one point to destroy at a time. If the attacking team can destroy two such control points, they win. It's a great mode for players who might not always have time to play through a full rush or conquest match. On the downside, squad rush is currently a pre-order bonus for console versions of the game, and will be that way for 30 days following the game's release, at which point it will be unlocked for all to use. Additionally, the game ships with a "VIP" code in the box on consoles, which like Mass Effect 2 and other games before it, is designed to deter second-hand purchasers by locking them out of certain content. Or you could look at it as "if you buy the game new, you'll get a free map pack out of it in a few weeks." Debating the pros and cons of such tactics is outside the scope of this review, but consider yourself informed about the nature of this game's code-based offerings. PC owners get squad rush immediately, with no code required.

Regardless of the modes and all that other stuff, the action in multiplayer remains largely the same, which is to say that it has a tactical depth that most shooters lack. You can hit a button to "spot" enemies, causing them to show up on your team's radar for a few seconds. You can pilot a UAV, giving you a sky-high view of the map, which makes it easier to spot for your team, though the drone can also fire a few missiles at targets. The UAV, as it turns out, leads to one of my favorite things to do in Bad Company 2: sneaking up on someone that's currently using the UAV station and stabbing them in the back, then sending the UAV crashing to earth. Of course, other vehicles are in play, giving you plenty of chances to royally mess up while attempting to pilot a helicopter or drive a tank while shooting at targets. The game retains its layered approach to unlockable items by tying most of its weaponry to the specific classes. So by playing as a medic, you'll gain additional medic weapons, which are usually light machine guns. By playing the engineer class, you'll get more submachine guns and gain access to the repair drill, which you'll need if you want to repair vehicles. Though I'm effectively married to the assault class and its ability to toss out ammo crates to help resupply troops in the field, the classes all have a different feel that makes them compliment each other very well.

The things that sticks with me about the multiplayer, though, is its audio. While most games can do up-close gunfire extremely well these days, once you get further away, it often loses a lot of its character. Battlefield's indoor/outdoor exchanges, where you might hear someone firing their XM8 all the way across the map while standing around a corner, all sound acoustically appropriate. Weapons fire and explosions muffle properly at range and echo around the environment amazingly well. You'll hear callouts from the troops as they perform tasks, and all of them sound, well, kind of savage. Hearing an American soldier curse up a storm as he's stabbing an enemy from behind is downright jarring, compared to the dry military talk that most other multiplayer shooters deliver. It's impressive, and all of that audio goes a long way toward making Bad Company 2 feel huge.

That huge feel has always been the big differentiator between the Battlefield series and other first-person shooters, and Bad Company 2's multiplayer has plenty of that to go around. Where the first Bad Company felt like a solid take on placing the PC-friendly Battlefield experience on consoles, Bad Company 2 settles in and feels right at home on both consoles and PC. This no longer feels like a compromise made to keep the console kids busy while PC owners wait for the next "real" Battlefield game. It feels a lot more like the genuine article, streamlined and bumped up to 2010 standards. If you appreciate the way Battlefield has done this kind of open, spacious warfare in the past, you're going to love it. Fans of the previous game's campaign mode, however, will probably feel a little disappointed.
Jeff Gerstmann on Google+
Load Comments 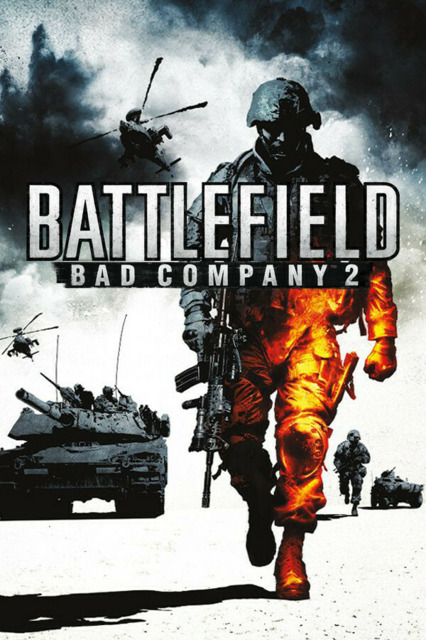