by Ryan Davis on August 27, 2012
Share:TwitterFacebookReddit

Harmonix builds on its collective knowledge of rhythm games for a downloadable experience that offers something old and something new.

It’s been a good two years since the tide broke fully on the trend of big plastic-instrument-driven rhythm games, a trend that developer Harmonix capped capably with 2010’s Rock Band 3. And while everyone seems to have had their fill of that expensive, living-room-cluttering karaoke experience, Harmonix is betting that folks still have an appetite for a lower-stakes form of rhythm game action with Rock Band Blitz. This is a single-player downloadable game that leverages the Rock Band aesthetic--and, more importantly, the Rock Band DLC you may have already purchased--against gameplay that more closely recalls the Cambridge developer’s work with Sony on Frequency and Amplitude, though without being an exact facsimile of either of those titles. It’s got some agreeably sticky social hooks that, still, could’ve been better implemented, and it’s a harder experience to recommend if you’ve not already made the monetary investment in Rock Band DLC--or, at least, spent the $5 to $10 a pop to export the songs from some of the several on-disc Rock Band games that support such a feature--but under the right circumstances, it’s a terrifically difficult game to put down.

The basic format will be immediately familiar to rhythm game players of most stripes, presenting you with a scrolling highway of note patterns, broken into discreet lanes for each instrument--drums, bass, guitar, vocals, and, when the occasion is appropriate, keyboard. Unlike the traditional Rock Band experience, Blitz is played with a controller, and allows you to switch from one instrument to another at will. And unlike other, similarly abstracted Rock Band experiences--like Rock Band Unplugged for the PSP, or the simply titled Rock Band for iOS--the note patterns for each instrument have been boiled down to just two notes. By default, you use the d-pad and the bottom face button (A on the 360, X on the PS3) to trigger left and right notes, respectively, with the shoulders shuttling you from one instrument to the next. It’s a setup that can initially feel a little awkward, specifically using the d-pad effectively like a button, and while there are a number of alternate control schemes to choose from, I eventually found the default to be the most comfortable. Perhaps more importantly, the game is still able to evoke the overall sense of playing these instruments, even if they’ve been abstracted all the way down to alternating button-presses on a gamepad.

The basic simplicity, and familiarity, of the gameplay in Rock Band Blitz can be deceptive, because the layers of systems in place in Rock Band Blitz alter the way you approach the gameplay on a pretty fundamental level. Unlike Rock Band, instrument score multipliers aren’t based on a sustained string of perfect note hits, but rather, build up over the course of the entire song, increasing incrementally with each successful note hit. However, songs are divided into sections, and as you transition from one section to the next, the lowest instrument multiplier you’ve built up thus far will determine the maximum multiplier you can achieve with any instrument in the subsequent section. Since these multipliers can impact your score exponentionally--and make no mistake, though you’ll earn “stars” as your performance improves, your actual numerical score is the truer yardstick of success in Rock Band Blitz--your number one priority is to max out all of your instrument multipliers as efficiently as possible.

But then, the importance of selecting the ideal combination of power-ups before going into a song cannot be overstated, either. When you first start, you won’t have access to any power-ups at all, a handicap that will, at least in most cases, prevent you from getting five stars on a song, let alone post a competitive score. As you play, though, you’ll earn two types of currency that are central to the power-up system. Blitz Cred is effectively your experience level, and earning more of it unlocks more power-ups to choose from. Your Blitz Cred number never goes down, unlike Coins, which you earn similarly, but which you have to spend in order to actually equip the power-ups before starting a song. Power-ups are divvied into three categories. One determines the effect of activating stored-up Overdrive--which can range from an additional, temporary multiplier bump to randomly clearing out swaths of notes in front of you--the second determines the effect of special purple trigger notes, and the third essentially lets you choose one instrument to receive an additional score bump for playing. Certain power-ups complement each other better than others, and it simply takes experimenting with different combinations to find which ones yield the best results.

I haven’t even mentioned Blitz mode yet, which triggers automatically and creates an increased sense of speed on the note highway, along with an additional score bonus, when you go a stretch without making any mistakes, but it should be clear by now that there are kind of a lot of moving parts in Rock Band Blitz. It’s a surprising amount of systems layered on top of systems for a game that initially seems so simple, and frankly, the game doesn’t do a terrific job of explaining them all. Or rather, the tutorial just sort of piles them all on at once, and when you’re just starting, it’s difficult to parse out which bits will be truly significant. You’ll figure it out as you go along, but it can make the low scores you post early on a little confounding.

Rock Band Blitz comes with 25 licensed songs, covering the typically eclectic Rock Band spread, including everything from classic Elton John and Rick Springfield jams to modern earworms by Maroon 5 and Foster the People. The full soundtrack also functions as traditional Rock Band songs, so if you’re still an active Rock Band player, Blitz is an absolute no-brainer bargain, considering the going price of Rock Band DLC. If you only have those 25 songs, though, you’re simply not going to be getting the most out of Rock Band Blitz, as the real value here comes from the game’s capacity to tap into your (presumably) existing Rock Band library. It’s the savviest, most-clever part of Rock Band Blitz, providing a new lease on life for content that you’ve likely long since paid for and forgotten about, particularly for someone like me, who has already (shamefully) spent hundreds of dollars on DLC and disc exports.

Once you’ve played everything on the included soundtrack once or twice and unlocked all of the power-ups, there’s not much formalized structure in Rock Band Blitz, which gets its longer legs from pitting your scores against those on your friends lists, a feature that doesn’t really open up until you hook the game up to your Facebook account. From here, you can access Rock Band World on your PC and challenge your friends to a Score War--a song-specific multi-day high-score competition--or make progress on a variety of eclectic goals, all of which earn you those precious Coins you’ll need to continue using power-ups. If your friends are into it, the Score War stuff is terrific fun, it’s just a shame that it all can’t be deployed from within the game itself, requiring you to bounce back and forth between your PC and the game. While the ability to cross-pollinate your Xbox Live (or PlayStation Network) friends list with your Facebook friends list is kind of nifty, it’s a bad tradeoff.

The clunky social integration and overabundance of games systems strata ultimately don’t negate the old-school rhythm game fun in Rock Band Blitz, and if you’re already invested in the Rock Band platform, it almost seems foolish not to spend the $15 to extend the life of your library.

EDITOR’S NOTE: For the sake of full disclosure, members of the Giant Bomb staff, the reviewer included, have personal relationships with members of the Harmonix community and public relations team. Not in, like, a sexual way. At least not that we know of. But you get the idea. 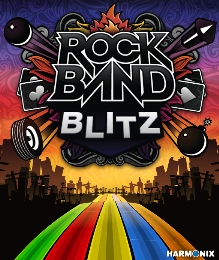