by Ryan Davis on July 9, 2010
Share:TwitterFacebookReddit

Treasure gets playful with this dizzying shooter sequel that's both accessible and challenging.


When it comes to its shooters, Japanese developer Treasure seems to know two speeds. On the one end you've got games like Ikaruga or Radiant Silvergun: incredibly focused shooters that distill the genre into its most brutal elements. These are elegantly savage, unforgiving games designed strictly for skill-driven players, or those who simply like to be shamed by their electronics. On the other end there's stuff like Bangai-O! or Gunstar Heroes, cartoony games that take much greater liberties with what defines a shooter, while still managing to pack in plenty of challenge. Treasure's latest, Sin & Punishment: Star Successor, falls squarely, and satisfyingly, in the latter category. The production quality can be underwhelming at times, and like its N64 predecessor, it's a fleeting experience. But this game moves, it moves fast, and I found myself consistently surprised by the directions it moves in.

Star Successor plays with the basic on-rails shooter concept that drove games like Space Harrier and Panzer Dragoon, allowing you to move around the area of the screen while the game assumes control of both the movement through the environment as well as the perspective of the camera. Star Successor's dynamic use of the camera is one of its greatest strengths, allowing it to transition, at will, between horizontal, vertical, and behind-the-back perspectives. The wild variety of environments play up this aspect, and like a good roller coaster ride, it can make for a delightfully disorienting experience as floors turn into ceilings and up becomes sideways. Regardless of its fancy footwork, this is still a shooter, so you'll logically spend most of your time in Star Successor shooting, usually while simultaneously trying to dodge a near-constant barrage of incoming fire. You've also got a melee attack should enemies get too close, as well as a powered-up shot that's good for crowd control or particularly stubborn enemies.

The pacing of this game is relentless, and it forces you to make the most of your ability to move about the screen independently of where you're aiming. In the back half of the game, I found myself using the game's quick-dodge ability almost constantly to avoid the hail of enemy fire. The game offers a number of control options, though I found that using the Wii Remote to aim and the Nunchuk to move was my favored setup, in part because I found the analog sticks on the Classic or GameCube Controllers too sluggish to keep up with Star Successor's frantic action. As someone who, due to the overall level of difficulty, tends to enjoy Treasure games in concept more than in practice, I'll admit here that I played Star Successor on the game's easiest difficulty. Generally speaking, I breezed through most of the game, though I also found it too intense and exhausting to play for very long stretches. But even on the easiest difficulty, I still found myself snagged on boss fights, totally, albeit temporarily, baffled by how to proceed.

So, a thing about boss battles in Star Successor. There are a lot of them. Like, I very probably spent more time battling bosses than I did the cannon fodder in between those big encounters. Treasure's not afraid to just stack one screen-filling, camera-spinning boss fight right after another, cleanse the palate with something that more closely approximates a traditional shooter level, and then on to another boss fight. It's something that contributes significantly to the game's relentlessness, which is itself a characteristic that suits a shooter particularly well. Also, the bosses are almost consistently nuts, with a variety that borders on the psychedelic. You'll do battle with a drippy, orifice-covered, building-sized biomechanical nightmare; a giant flying sand-tiger-eagle monster; an impossibly huge, robot-and-missile-spewing super battleship that floats in lava; a mind-bogglingly complex space station draped in lasers; and a samurai-space-horse-god demon, to name just a few.

Sin & Punishment: Star Successor isn't a lengthy experience, and all told I probably spent four or five hours playing through the story. You can also play the game cooperatively, though the second player's presence in the game is limited to their on-screen targeting reticle, and even then, I found the additional action more distracting than helpful. Really, the key to wringing the most value out of this game, like most shooters, lies in an innate desire on the player's behalf to repeatedly work through the game on harder and harder difficulty settings. If that's not in your DNA, Star Successor might not represent the greatest value for you.

More than its length, though, I found myself underwhelmed by certain aspects of the game's presentation. For all its speed, Star Successor makes some noticeable sacrifices with the clarity of its textures and the level of detail in the environments, and much of the color in the game seems oddly desaturated as well. Usually you're moving too fast to notice, but it makes the already-stilted cutscenes that much more awkward. Some stiff voice work contributes to this as well, though the propulsive synthesizer soundtrack does its part in redeeming the overall sound design.

The past decade has been pretty lean for shooters, which have survived by pleasing the weird whims of an increasingly niche audience. If there's anyone that can bring the genre back on track, it's probably Treasure, and Sin & Punishment: Star Successor seems like a step in the right direction.
Load Comments 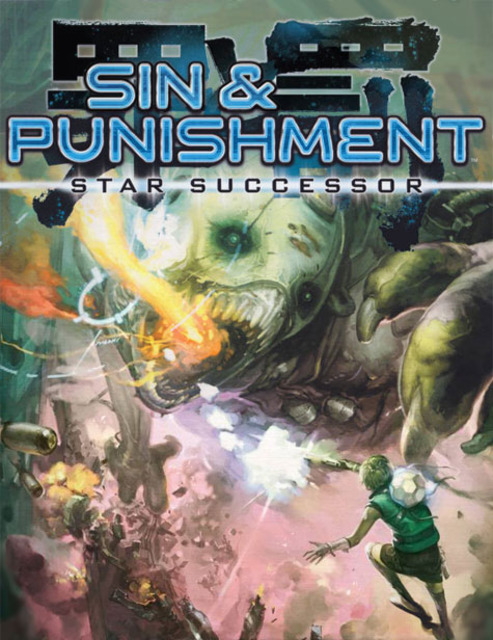