No I'm not crazy, I liked it more than the first

It’s not too often a game is able to completely surprise you. When Bioshock 2 was first announced, my initial reaction was a mix of resistance and skepticism. As a fan of the first Bioshock, I was wary of how a sequel could undercut the richness of the original. These things must be done delicately. The first Bioshock was not perfect. The plot-twists made the last third of the narrative lose steam, the shooting mechanics felt somewhat hackneyed, and the hacking mini-game brought the pace to a dead halt. That being said, the real star of Bioshock was the city of Rapture. It was a fully realized world unlike anything gamers had seen before. Going in to play the sequel, some of that initial charm and awe of discovery regarding Rapture is lost as it’s not an entirely new experience. However, the team behind Bioshock 2 has made some improvements to the gameplay, shooting, and pacing issues that really make this a worthwhile sequel. As I said before, Bioshock 2 took me completely by surprise. I went in expecting to find something that didn’t quite live up to the first game. In this review, it would be almost impossible not to compare the sequel to the original. It may sound crazy, because I know there are fans out there who hold Bioshock in the highest regard, but in many ways the sequel actually surpasses it.

Bioshock 2 is set ten years after the events of the original. Much has happened since the fall of Rapture and the end of Andrew Ryan. In his place, Sofia Lamb, Ryan’s philosophical opposite, has taken over. Rather than supporting Ryan’s belief of complete independence from the system, Lamb embraces a more socialist view of uniting as one for the greater good. Her daughter Eleanor has been bound to you. As a prototype Delta unit Big Daddy that’s been separated from his Little Sister, the quest to reunite with her takes him through some of the oldest parts of Rapture. Returning to the underwater dystopia feels good and familiar, like a song you used to love or your Mom’s home cooking. My early concerns that this would somehow feel like a cheap cash-in on the Bioshock name were gone within the first few minutes once I realized the world is interesting enough to keep players content with exploring through another ten-hour experience. 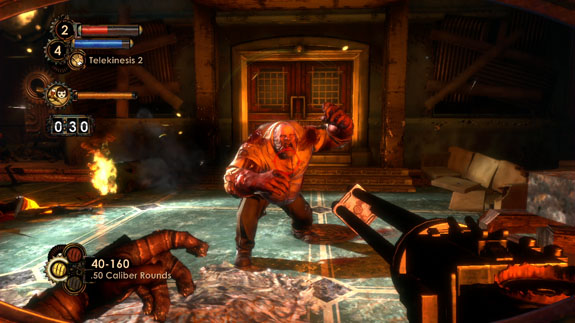 Bioshock 2 addresses many of the issues contained in the first. The original was great, don’t get me wrong, but it wasn’t perfect. Everything in the sequel feels much more streamlined. Shooting is vastly improved. Players can now duel-wield between plasmids and firearms, making the combat far more efficient, fun, and open to experimentation. But the shooting overall, the sheer mechanics of aiming and firing, is much sharper. It feels more like a competent shooter which is, I assume, one of the reasons they added the multiplayer component— but more on that later.

As the Delta unit makes his way through Rapture, he’ll come across Little Sisters with their respective Big Daddies gathering Adam, the city’s all-powerful substance that drove people to madness. Players must defeat these “Mr. B” bodyguards and determine how to deal with the Little Sisters. The first Bioshock dabbled with the same morality structure of killing and harvesting them for a lot of Adam or saving the girls for slightly less. Depending on the player’s decision, the outcome this time around is much more than a different movie at the end of the game. In fact, Bioshock 2 encourages the adoption of the Little Sisters as the game’s best mechanic of gathering Adam was easily my favorite part of the experience.

Occasionally, Delta unit is tasked with protecting his adoptive Little Sisters as they gather Adam. During this time, Splicers, the crazed citizens of Rapture, will be attracted to the location, gunning for the girls. Fending them off, setting traps, and utilizing the game’s enhanced weaponry was addictive and, simply put, a blast to play. These horde-esque moments punctuated the action and were a fun diversion from the Bioshock formula. A strategy begins to emerge as Delta unit preps for the next Splicer onslaught, it’s great. 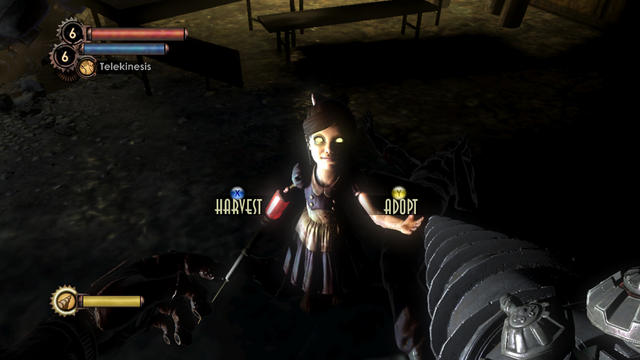 The game shies away from actual boss battles and with good reason. I imagine many would be hard-pressed to find people who absolutely loved the final encounter in the original Bioshock. The closest players will find to a boss in this game are the numerous run-ins with the Big Sisters. If a Big Daddy was the thing to fear in the first game, the Big Sisters are the equivalent. While not as tough as the Big Daddy seemed in the original, Big Sisters are grown up versions of Little Sisters who have taken to wearing a similar set of armor as their former bodyguards.

On the subject of difficulty, I found Bioshock 2 to be a wholly easier game than the first. Playing both games on Normal difficulty was a vastly different experience. I consider myself a moderately good player, nothing spectacular. I was surprised to see the Playstation trophy icon pop up for never using a Vitachamber (the game’s respawn system) as the credits began to roll. Meaning I never died during Bioshock 2. Whether or not other players have the same experience isn’t certain but it needs to be said that perhaps this is a more mass-market design. The game has its difficult moments, that’s for sure, but I was often so overpowered that, by the end of the game, I could take on pretty much any situation without fear of losing my progress.

Exploration has also been given a more streamlined approach. Gone is the ability to travel back to previous areas and while many will see this as a negative, at the very least it keeps the narrative moving forward. One word of advice— be sure to explore all possible areas within a level before moving on as the game moves along a train-track that only goes one way. While it feels inflexible, I myself didn’t have a need to back-track in the original Bioshock unless the game required it. The structure in Bioshock 2 is just as enjoyable. I still found myself obsessively searching every filing cabinet, every corner, and every Splicer for goodies before moving on.

Unfortunately, the environments of the game aren’t as varied to the same degree with which Bioshock fans are accustomed. The first took players to gardens, frozen fisheries, and everywhere in between. The sequel tends to exist within a lot of similar-looking offices, hotels, and apartment buildings. That’s not to say these levels look bad or were lazily conceived, it just didn’t have the same sense of variety. This could be a result of simply being a sequel and some of the magic of discovery is gone. 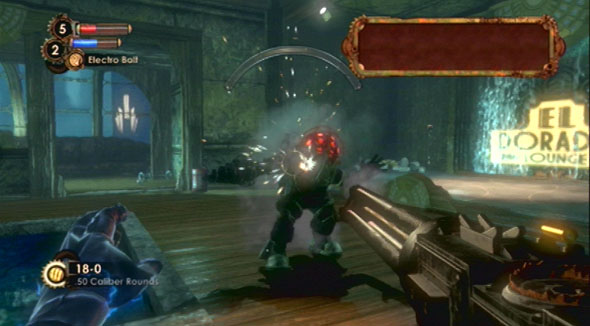 There are a few issues that went untouched. For the life of me, I don’t understand the need to make me tap right if I want to use a health pack. In a way, I see the strategy involved of waiting until my health gets lower before using a pack and risking death or playing it safe. But the system allows for Eve to be refilled automatically once it reaches zero if the player has a hypo available. It just seemed like an anachronistic design decision I wish had been rectified when crafting the sequel. In addition, the story of Bioshock 2 isn’t quite as strong as it could be and often feels shoe-horned into the experience.

Not only were fans hesitant to accept a sequel could be a good thing, but online multiplayer also didn’t seem to jive with some of the Bioshock diehards. But yet again Bioshock 2 surprises.

Set years before the original Bioshock timeline, the multiplayer has its own narrative, piecing together the civil war that erupted during the Ryan-Fontaine rivalry. Players can enter into a variety of multiplayer staples such as Deathmatch, Team Deathmatch, a Little Sister-centric version of Capture the Flag, etc. In addition, the game takes cues from online heavyweights and incorporates a leveling-up system with perks and better weapons.The online is a fun distraction worthy of a long weekend. It isn’t going to replace player’s online standbys like Battlefield Bad Company or Modern Warfare but once players are dropped into a game throwing plasmids and shooting at fellow Rapturians, it can be a lot of fun.

Overall, Bioshock 2 is full of surprises. In many ways, the streamlined structure, improved gameplay mechanics, and faithful double-dip into Rapture paid off. The pacing is pitch-perfect, allowing me to even consider it to be the superior game over the original. While I wish some moments had been retooled to allow for greater difficulty, the game is not without some challenge and the harder modes only encourage the brave to play through it again. I realize I’m probably in the minority when I say that I prefer Bioshock 2 to the original but, story aside, it’s a better game in terms of mechanics and on the whole a far more enjoyable experience.

Other reviews for BioShock 2 (PlayStation 3)

Once upon a time there was a magical kingdom under the sea. All kinds of exotic jellyfish and coral reefs occupied this kingdom to greet the citizens, all of which had magical powers. The king of this land was a wise and charismatic leader with ambitions of utopia and addressing the pedophilia issue by protecting all daughters with hulking submarine monsters. These monsters, despite being fatherly figures in name, were unorthodox in their tendency to solve conflict by means of mining equipment...

It can be hard to live up to expectations. Heck, just imagine being little Suri Cruise, you’re expected to be both good looking and certifiably insane. Rough. Video game sequels, however, are quite often superior to their predecessors. Developers are able to improve upon what came before, with better controls, more intricate level designs, or higher production values; they also get the opportunity to flatten major faults like a Yankee fan at a Red Sox convention. The problem facing Bioshock 2 is...

While the story doesn't always hit as hard as its predecessor, there are plenty of great gameplay changes that make BioShock 2 a worthwhile experience.