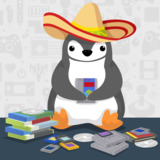 Just posted the first entry in my look at the 33 dreams of Lost Odyssey's Thousand Years of Dreams here http://www.giantbomb.com/f...

I'm in. Day 1 purchase. I'll probably be streaming this for the Giant Bomb Community Endurance Run. I am down for the dumb.

@bisonhero: Yeah, I felt like I understood the ways to break the game after two runs, but the game decided that I needed to complete like 10 more because I needed to do more escape room stuff. So by the time I got to The Stuff I was thoroughly burned out on the card game. The last third of the game was a real slog because both the escape room and the card game felt played out. The first third of the game is the best part by a lot.

And if you really like card games, you might still have a hard time getting to the end of Inscryption because it's not a very interesting card game.

You need to do more stuff in the escape room before beating the card game lets you get to The Stuff. I would focus on solving puzzles in the room and using the items and cards you find there.

Guess who's back, back again? The Giant Bomb Community Endurance Run is back! Tell a friend!

This year the Community Endurance Run is going to kick off on April the 9th and run through Sunday April 11th.

Several awesome members of the Giantbomb community are going to be streaming a wide variety of video games and video game-like things on Explosiveruns.com in order to raise money for charity!

For the 11th GBCER, we're back to supporting Pencils of Promise. This year we're going for a big milestone: $15,000. A Pencils of Promise classroom costs approximately $10,000 and I think we are in position to raise that and more this year. For the price of fifteen copies of Garou: Mark of the Wolves we can build a classroom for kids who need one!

We are going to have a number of different events, prizes, and donation incentives running all weekend so be sure to mark the GBCER on your calendar and get ready for the fun and the funding. This year we're also happy to announce that we have a single team page AND individual donation pages! That means that if you want to donate for a specific person's donation incentives, prizes, or you just want to shout out one person in particular, you easily can!

Go here to watch the event!

If you would like to participate in the Community Endurance Run, PM me and I’ll get you in on the action. Get #GBCERXI trending! Get hype!

There will be ongoing updates every week leading up to the event so keep checking in!

Schedule (All times are in EDT):

@meatsofevil and a friend will be playing Co-op Tokyo Jungle. 6 hours is tentative, possibly longer.

@personz will be playing Co-Op Games Until at least 2 AM (may go longer depending on energy situation). We're looking at Trine 2 and We Were Here Together to start.

@riostarwind will be reading the story of Robotics Notes Elite for the first three hours of their stream. The last half is the heart pumping action of Metal Gear Rising as we diverge from all the drama to a silly action game.

@nickieroonie will be running through Hades... literally. They will be escaping the underworld using only their feet! What do Zag's feet look like? Tune in to find out!

@thatpinguino will be embarking on a Final Fantasy Trading Card Game gauntlet. The will start with armatures and battle their way all the way up to World Championship level competition! Will they reach the summit or scrub out?

@ybbaaabby will be playing some games! Who knows what sort of fun hijinks might be had?

@jeffrud will be trying to save the Seattle Supersonics in NBA 2K. Depending on how well they do they will then play an appropriately good/bad Sonic game!

The Trash Squad will be playing some edutainment games with some freeplay pallet cleansers mixed in. They will be taught and tested, but will they ever learn? Pay attention, there will be a test later.

@rorie will be playing something in the dead of night! Keep them company and look at some puppies.

@relkin will be playing through all of Resident Evil 5! Who has the guts to join them for spooks during the early morning?

@riostarwind will be continuing their reading of Robotics Notes Elite and playing Metal Gear Rising.

@meatsofevil is going to be playing some Expert Pro Drums on RB4 until their body gives out. 5 hours is the goal, but if they don't just play all the hard songs, they could probably go longer.

@personz will play Resident Evil 7 to start. Then they will move on to either Sword of Mana or its Counterpart Final Fantasy Adventure once RE 7 is done.

@nawaba will be playing two Pokemons on One Controller! They will be playing Pokemon Crystal and HG/SS randomized, nuzlocked, and on once controller! Any other challenges we can throw on this? Blindfolded? Foot control? Hanging upside down?

@jeffrud will be continuing their attempt to save the Seattle Supersonics.

@zombiepie and @thatpinguino will be playing FFII and racing to see who can get the farthest within ten hours. Who will be able to make progress in this awful, awful game?

@meatsofevil will be joined by their friend @zagzagovich will be joining remotely for some FMV and some other adventure game madness.

@nawaba will be continuing their Pokemon Nuzlocke run!

@personz will continue Resident Evil 7, play until beaten, and take breaks as needed. Then they will move on to either Sword of Mana or its Counterpart Final Fantasy Adventure once RE 7 is done.

@meatsofevil will continue FMV madness. They'll be playing a bunch of different stuff. From Shadow of the Colossus to Caves of Qud and who knows what else. To wrap the end of the day, @zagzagovich will return to play some Outcast: Second Contact!

@riostarwind's final day is another 6 hours split into two sections. First half they will, once again, keep on reading through Robotics Notes Elite. Then they will finish off Metal Gear Rising if they didn't do it already. To fill in the rest they might as well go maxium anime by playing some Asura's Wrath to finish off the marathon.

@nawaba will be wrapping up their two Pokemons, One Controller run!

@jeffrud will be wrapping their attempt to save the Seattle Supersonics by playing the Sonic game that their performance dictates. Will it be Sonic 1 or Sonic 2006? Only the Basketball Gods can say for sure.

@zombiepie and @thatpinguino will be playing Rollercoaster Tycoon with a series of unique park creation rules and goals! Tune in to see what types of parks they have to make and whether they can achieve success in the hardscrabble world of Scramblers.

Prizes (Please leave a comment with your donation stating which prize you would like your donation to go towards and your GB username so we can contact you if you win):

@riostarwind is offering to draw a character for every donation over $25 that they receive! Here are some samples of their art:

@justin258: St.Vincent is a musician. She's quite good! She apparently also plays Fortnite, which is the gimmick of Abby's premium series.

Yoshi does not eat anything. Once a foe enters Yoshi's digestive tract, it is merely coated with a delicious candy shell. Yoshi, therefore, cannot out-eat Joey Chestnut. He can, however, create hotdog M&Ms faster than Joey Chestnut can eat hotdogs.

That game sure was weird. What a high concept slot machine.

Hey folks, while human rights atrocities committed by the Chinese government aren't exactly a light topic, please remember that everyone in this thread is a member of this community and should be treated with respect. You don't have to agree with anything someone else is saying, but leave the insults and accusations of bad faith out of your replies.