The Secret of Monkey Island Review

by Ryan Davis on July 21, 2009
Share:TwitterFacebookReddit

Nearly twenty years later, the humor and the puzzles of this seminal LucasArts adventure game still hold up, and the new production values help it feel fresh again.

LucasArts, which seems to have wised up to the value of its adventure game back catalog after spending far too long ignoring it, recently revived its farcical swashbuckling adventure series with the episodic Tales of Monkey Island. While this no doubt pleased plenty of grown folks with fond memories of insult duels and voodoo root beer, there are plenty more with no point of reference for genre conventions or the fiction of the Monkey Island series and the running gags and in-jokes that come with it. Both groups are served well by LucasArts' release of The Secret of Monkey Island Special Edition, a remake of the first game in the series that delivers modern production values without, ahem, monkeying with the goofy dialog trees, silly pirate talk, or loopy puzzle logic that defined the game in the first place. It's not without a few moments of awkwardness, but it's all minor stuff I found quite easy to forgive.

Set during a mythical and anachronistic age of pirates, The Secret of Monkey Island opens up with a young knavish fellow named Guybrush Threepwood rolling into the buccaneer-filled Melee Island and declaring his desire to become a full-fledged pirate. Three important-looking pirates at the local grog-hole send him off on a series of trials to test his worthiness, during which he gets caught up in a love triangle with the beautiful governor of Melee Island and her ghostly suitor, LeChuck. There is no shortage of silliness along the way, with the naive Guybrush forced to deal with bickering circus performers, a duplicitous sheriff, a shady treasure-map dealer, piranha poodles, an oily used boat salesman, and, of course, some monkeys.

The Secret of Monkey Island carries the usual adventure-game balance of dialog and puzzles, though when compared to more recent adventure games like the stuff Telltale's been doing, it's both more complex and more challenging. Its SCUMM engine roots give you a number of ways to interact with other characters, the environment, and inventory items, creating incredible versatility as well as lots of dead-ends to scour when you find yourself stuck. It's easy enough to hit the internet for walk-throughs, though the game does one better by having a hint system built right in. Simply hold the X button and the game will gently nudge you in the right direction. If that's not enough, each subsequent use of the hint system becomes more explicit, and eventually, big fat yellow arrows will pop up, telling you exactly where you need to go next. It's something that eliminates much of the frustration that's inherent to adventure games, though once you start using it, it can be hard to stop, and one of the great pleasures of adventure games is solving a puzzle that you thought was impossible.

All of the graphics in this Special Edition have been completely redrawn with great detail, making the game much better suited for play on a nice big HDTV. Each screen is quite faithful to the layouts of the original, though the new art is a bit more stylized. While I don't love the overt foppishness that Guybrush's new physique implies, what's more bothersome is that, for all the detail found in every screen, it seems to maintain the same number of animation frames as the original, which can lead to some jerky looking movement. This Special Edition also takes all of the original control options off the screen, relegating them to contextual button presses and speedy submenus. It's definitely a change of pace, but it's something that I think makes the game far more suitable for a gamepad.

In addition to a lush new instrumentation on the soundtrack and some nice ambient sounds, all of the dialog is now spoken. Sometimes the voice work isn't a perfect fit--Stan the used-boat salesman sounds more like a game show host than anything--but some smart choices can also lead to jokes that simply didn't exist in the original. If, for whatever reason, you'd rather experience The Secret of Monkey Island as it originally looked and sounded, you can tap the Back button to toggle back and forth between the two versions on the fly, though I found this to be a fleeting novelty.

It's been long enough since I last played The Secret of Monkey Island that, despite the age of the source material, the experience still felt fresh. There are definitely moments where you can feel its age, and there's the distinct possibility that you remember The Secret of Monkey Island being funnier than it is, but this Special Edition is still a terrific way for both fans of the old point-and-click adventure games to revisit a classic, and for newcomers to get acquainted with it.
Load Comments 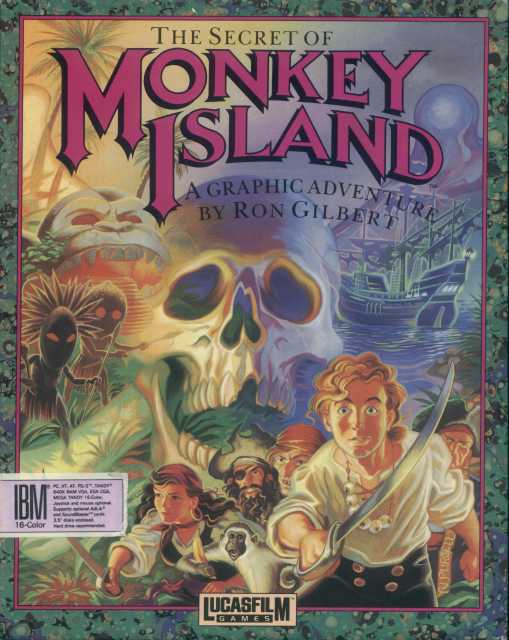