by Jeff Gerstmann on November 27, 2012
Share:TwitterFacebookReddit

I don't know that I'd call PlayStation All-Stars Battle Royale an ambitious game. Its developers surely must have sat down at some point early in development and said "let's make a Smash Bros. game but with Sony characters in it." And that's precisely what they did. It carves out its own fighting style in the margins, but make no mistake--this is a highly derivative game. That's not necessarily a bad thing, of course, though PlayStation All-Stars makes a couple of design decisions that make the whole thing feel a little more awkward than it should. Also, for a game that's supposed to bring together the greatest heroes of the PlayStation platforms, it's missing too many key figures.

Crash Bandicoot. Let's just get it out of the way up front, OK? I'm certainly not privy to whatever backdoor dealings went into securing (or not securing) characters for this game's roster, but if you're making a game that attempts to bring together the classic PlayStation players and you don't have the system's first big mascot, someone has already screwed up. Don't get me wrong, I'm not one of those weirdo Crash Bandicoot fiends or anything, and I'm well aware that Sony doesn't actually control the rights to the Crash Bandicoot property (through a series of mergers and sales, he belongs to Activision these days), but it's an embarrassing omission. While we're at it--and I'm sure those of you at home have already played along by filling out your own dream roster--it's difficult to talk about stand-out characters from the PlayStation era without bringing up Cloud Strife and Lara Croft. These three characters typify the early days of Sony's console business. Even though they aren't Sony characters, they're the characters that brought Sony to the dance and helped make the PlayStation the must-own platform through the back half of the '90s. If you catch me on the right day, I might even go so far as to say that if you can't lock down those three characters for your Sony fighting game, you probably shouldn't make your Sony fighting game.

The roster isn't all bad, though. The Sony-controlled standards from the modern era are present, like Ratchet (with Clank in tow), Jak (with Daxter, natch), Kratos, Nathan Drake, and not one, but two version of Cole from Infamous. That he gets two squares on the select screen instead of a "press triangle to select Evil Cole" treatment says to me that the developers were struggling to fill out that roster, but perhaps I'm projecting. PaRappa is in, and he's maybe the perfect mix of a known character that's still worth getting nostalgic about. You also get a set of also-rans that are too new and underused to feel classic, like Nariko from Heavenly Sword and Col. Radec from Killzone 2. These aren't franchise players, and while it's cool to dig deep, these guys aren't distinguished enough to feel like meaningful inclusions. Instead they feel like warm bodies, there to pad out Sony's end of the roster.

The game feels a little heavy on third-party characters, which is entirely sensible. Sony has always enjoyed firm support from third-party developers, and many of the best PS1 and PS2 games don't have SCEA's name on the box. But instead of focusing on the greatest names from PlayStation history (see above!), the inclusions here feel like a bunch of co-marketing deals masquerading as guests in a fighting game. Dante from Devil May Cry is here, but it's the new Dante. Say what you will about that redesign, but of the two Dante designs that are out there, only one of them could safely be referred to as an "All-Star" right now. Raiden from Metal Gear Rising is here. There are two BioShock Infinite-themed backgrounds, and Big Daddy appears on the roster. You know, Big Daddy from BioShock, that huge PlayStation 3 hit... that shipped like a year later than the PC and 360 versions? Instead of leveraging its past, the roster keeps an eye toward future releases. It makes a sizable chunk of the game feel like a series of ads instead of a love letter to the PlayStation brand.

It's a shame that this aspect of PlayStation All-Stars sticks out so much, because once you get past the roster and its lackluster story cutscenes, Battle Royale is a fun little game. It's a chunk of frantic action that blends button mashing with meaningful strategy, even if that strategy comes from a slightly strange set of systems. All-Stars is all about your three-level super meter, and your sole goal is to build that meter up and unleash it at the appropriate times. Landing a super on an opponent is the sole way to kill that opponent and earn points. By default, your overall total at the end of a match is kills versus deaths, with two points earned for earn time you kill an opponent and one subtracted each time you fall to an opposing super. So, in a sense, waling away on another fighter has no direct impact on that fighter. But indirectly, it's key, because while you're landing attacks you're earning more meter and your victim, who's just standing there and taking your attacks, isn't. Throws and a couple of other attacks give you an opportunity to steal some of another player's super meter, too.

This means that the game really comes down to your knowledge of a character's super attacks and how best to land (or avoid) those attacks. So what the game lacks in moment-to-moment monitoring of a damage meter it makes up for in a multitude of "oh snap!" moments when the supers start popping off. Some of these attacks, particularly the low-level ones, feel like they come out of nowhere, so when Parappa runs up behind the other three fighters and busts out a flash kick that kills all three players, it's rad. When Raiden does a breakdancey little spin kick that takes out foes on either side of him before you can figure out what was happening, it's the sort of thing that makes a couch full of players start shouting up a storm. It's chaotic fun. The higher level supers get flashier and are more in line with a character's unique style, so Sly Cooper gets a little sniping sequence that feels like it fell out of one of the Sly Cooper games. Sweet Tooth turns into a giant robot. Kratos goes nuts and starts swinging a sword that kills in one-hit. The bigger attacks are more stylish and pretty interesting, but I always felt like I was doing better when I was slipping into range and busting out my low level supers on unsuspecting players.

For a game that should be bursting at the seams with personality and charm, PlayStation All-Stars sure has some drab, plain menus. Once you're actually inside the game and fighting, things look fine but a little basic. The flashy super combos are certainly over-the-top, but the baseline action looks like a bunch of tiny dudes scurrying around and a bunch of little hit flashes. This ends up being worse on the Vita, since it's a smaller screen to begin with, but even on the PS3 I was picking myself out on-screen by the big player number text that floats above each character's head. All of this action is set on a series of mash-up backgrounds that start out based on one game, but transition into another. These transitions are the same every time, though, so seeing Chop Chop Master Onion's dojo bust apart so a Killzone robot can invade the stage is surprising and cool precisely once. More randomness in the stages would have made this stuff way cooler.

The single-player side of All-Stars is very slim, but a lot of what's there seems to be focused on getting you to understand the game's fighting style and, ideally, train you up to be a better online fighter. The online works great on both the PS3 and Vita, with a ranked mode that's broken up into "seasons," giving players multiple chances to be at the top of a season's leaderboard. And, if you buy the game on the PlayStation 3, you get access to the Vita version for no extra charge. I ended up preferring the default control scheme on the Vita over the PS3, even though the Vita version awkwardly requires you to tap the screen to pick up items during a fight. It's also worth noting that if you know that you only want a portable version of the game, you can get that on its own for $20 less than the console/handheld bundle.

PlayStation All-Stars Battle Royale is an interesting first attempt at bringing Sony's characters, stages, and items together in the traditional Smash Bros. style, but it fails to carve out enough style of its own along the way. It ends up being an interesting, if occasionally awkward "party" style fighting game that works a little better than you might think. But it also feels like a proof-of-concept that misses too many classic PlayStation figures and moments to truly earn the title "All-Star." 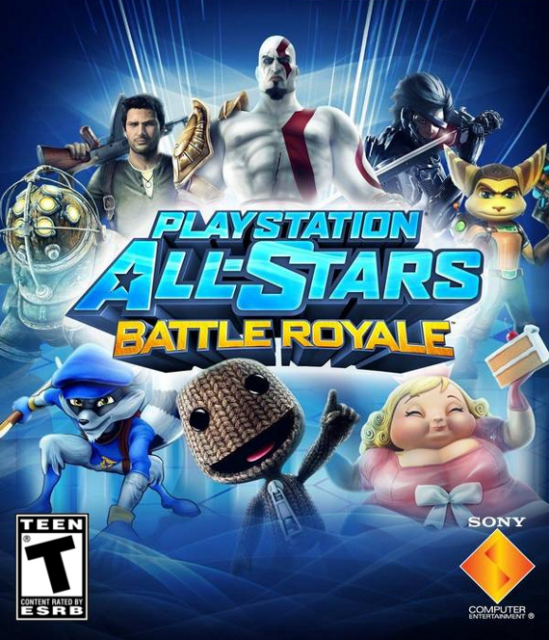