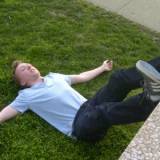 2016 was a huge year for me personally. I quit the best job I ever had and moved to Toronto to go back to school in order to chase a dream at almost thirty-years-old. With all the change, I currently live in a gaming time vortex.

I am currently listening to Giant Bombcast/Beastcast episodes from November 2015.

I probably do a third of my total yearly gaming in the month of December and this December, I dumped 35+ hours into Metal Gear Solid V: The Phantom Pain.

I spent zero dollars on this game and have come to regret that. At multiple points throughout my 11 months of play, I wouldn't really "play" the game for weeks at a time. I would simply ask for donations from the Giant Bomb clan, waiting for my decks to be powerful enough to break through the next ceiling that I'm sure paid players were able to break through in a fraction of the time. The core of this game is fun but all of the "pay-walls" surrounding the fun made it hard to recommend to anyone. I didn't put this game on my list. #moralvictory

As I mentioned at the top of the blog post, I am perpetually 12+ months behind on Giant Bomb podcasts. After hearing the zeitgeist with the Giant Bomb editors around MGSV, I decided to dive in head first. I did - and boy... it was fun. I tried to play the game as stealthily as I could and with that style of play, I got the same satisfaction I did from Tom Clancy's Splinter Cell: Chaos Theory, Tomb Raider and the bow from Crysis 3. But then I would screw up and the game would become Tom Clancy's Splinter Cell: Conviction or Red Dead Redemption. Say what you want about the story (wait... THERE'S A WHOLE OTHER CHAPTER), but this game mechanically may be the best open-world game I've played in recent memory.

A game in the vein of Crossy Road and Jetpack Joyride by former Halfbrick developers, this free-to-play game is a fun time-waster. Outside of the core stepping gameplay, this game is Crossy Road in aesthetic/progression and that's not a bad thing.

Pokemon Blue was a game that may rank in my lifetime top 10, so I was very excited play Pokemon Go when it was released. So much so, I couldn't even wait until the game was officially released in Canada to play. I lived in downtown London, Ontario when the game was released (@austin_walker lived for a few years while working on his PhD) and the city has a beautiful park downtown. The game was released in the summer, so everyday for a month, I would walk from my apartment to the park downtown. In addition to catching Pokemon, visiting Pokestops and competing at gyms, I went outside! I walked! I saw downtown festivals! It's just too bad that the game doesn't really have any lasting hooks. Once my friends stopped playing, I'm afraid my playing slowed as well.

I played the original XCOM on the iPad. Weird, right?

As a big fan of Intelligent Systems strategy games, this game tickles a special spot in my brain. Although I dumped 17 hours into the game when it was first released on PC in February, I burnt out on the game before the finish. I was having a hard time with the difficulty and wouldn't allow myself to ratchet the difficulty down to "Easy". That's a "me" problem. XCOM 2 is great. I don't love the isolation I feel when I game on the PC, so I'm hoping Firaxis eventually develops an iPad version of the game that I can play on-the-go like I did with XCOM.

The Gears of War games (except maybe Judgement) have always been snappy and beautiful. I agree with Jeff when he stated the following in his review. "While the airdrops of robot troops made the game's opening chapters feel at least a little different, the Swarm come off as the Locust troops of the previous games but with somewhat better AI." Also, the abrupt ending of the game sent me into a fit of rage. Outside of those two things, I had fun playing Gears of War 4 and place it mid-way through my list without having played much of the multiplayer modes. Great campaign.

A second Pokemon game in a top 8. I would have never called that in January.

My younger brother gifted me a copy of Pokemon Moon for Christmas and within a week, I had played the game for sixteen hours. Leading up to the release of the game, I followed the series of videos released by Nintendo about the changes to the games including changes to some of the OG Pokemon as well as changes to the structure of the game. Goodbye gym battles... hello trials. These trials offered some variety and will surely continue to offer new scenarios not yet seen in a previous Pokemon game. My team currently consists of OG Pokes Only: Growlithe, Gyarados, Kadabra, Haunter, Snorlax and Magnemite. One note... I was surprised by the amount of graphical slowdown within the Pokemon battles.

I got a taste of this game when I played it at PAX Prime this year before release. I had tons of fun playing Guesspionage within a group of 100+ fans of the game in Seattle. Fast forward three months and I see the game on sale on Xbox Live - I didn't hesitate. My non-game-playing roommates always suggest we play whenever we have company and we always have a great time. This is a much more well-rounded package when compared to The Jackbox Party Pack 2. A few words about each game:

Guesspionage: Good concept but game needs some tuning to speed up the game.

Quiplash 2: Aside from the acronym-based "Last Lash", this game is perfect.

TeeKO: Great game if you can find a good group. I've always had diminishing returns with repeat games with the same group.

Fakin' It: Great with alcohol.

Like Pokemon Blue, Uncharted 2 may be one of my Top 10 games of all-time. Although Uncharted 4 doesn't replicate that same early PS3 era "wow factor", it may be the best AAA game I have ever played. Naughty Dog is a master of storytelling and I respect them so much that I did two production projects about Naughty Dog games (Uncharted 4 and Jak 2) in my college radio program. Nolan North, Troy Baker, Emily Rose, Richard McGonagle and Warren Kole all deliver great performances and the many set piece moments kept me on the edge of my seat.

Uncharted 4 is the swan song I wanted for the series and the epilogue made me cry.

Haven't killed a game in a while. Overcooked w/ @jmccourt55 is my fave game memory of 2016! https://t.co/seb8Wm0SoG pic.twitter.com/rIaCr1V5Ts

I called my shot in August.

Three-starring the whole main game over the summer and three-starring both DLC packs over the Christmas break with my brother brought me back to my teenage years, where we lived in the same place and gamed together when we could.

If you have 1-3 friends, please download Overcooked... you'll have a fantastic time. Don't believe me? Watch.

I have never written such a long-form piece on GiantBomb before. If you have any feedback, please let me know.