by Brad Shoemaker on January 27, 2010
Share:TwitterFacebookReddit

BioWare's big new sci-fi sequel presents a more seamless blend of action and role-playing that bests its predecessor in every conceivable way.


The original Mass Effect should have been my favorite game ever. Here was a grand space opera from BioWare in the epic role-playing tradition of the company's own Knights of the Old Republic. It had a stunningly broad and shiny new sci-fi universe that mixed the political intrigue of Star Trek with the exotic aliens and quasi-mystical powers of Star Wars. There was combat that promised to blend modern third-person shooting with stop-and-go squad tactics for the ultimate in space warfare. The game even paid not just attention but almost reverence to the finer details of physical cosmology and the practicalities of space travel. It was like someone at BioWare looked inside my head, assessed my interests, and assembled a game especially for me.

But there was a disheartening counterpoint to every one of those great elements. The combat and RPG mechanics fell short of their potential with clunky controls, an overwhelming list of special abilities, and unwieldy inventory management. Outside of the fine storyline, the side missions and explorable planets were frustratingly repetitive and generic. An often embarrassing frame rate and constant, glaring texture pop-in bespoke a general lack of technical polish throughout the game. And don't even get me started on that Mako. Mass Effect was anchored and propelled by the strength of its sprawling fiction, but in a lot of ways, it was a hard game to love.

Mass Effect 2 is, across the board, a dramatic improvement on every one of those failings. It also improves everything the first game did right. BioWare clearly took a hard look at each aspect of its original design and figured out what was worth salvaging and what should be jettisoned right out the airlock. The Mako? Gone. Inventory management? Non-existent. In their place is a more intelligently designed, streamlined, and polished mission that's thoroughly entertaining at every moment. Everything about the gameplay and mechanics has been stripped down to its necessary components and reassembled seamlessly into a game that's more impressive and enjoyable from top to bottom. It doesn't hurt that the story is both more interesting and presented more fluidly, as well.

The game opens with a bang directly after the events of the first game, and quickly finds Commander Shepard in very different (and much more dire) circumstances than he, or she, was involved in last time. If you've made it this far without finding out exactly what sort of situation Shepard is in, I might as well help preserve the surprise a little bit longer. Let it suffice that the predicament is grim, and you'll find yourself working for, and with, some far less savory and perhaps less trustworthy people than the Citadel bureaucrats and special agents you're used to. The story gains momentum and intrigue from this fundamental shakeup, and you get a more colorful cast of characters to work with thanks to the relative lawlessness you're operating in. There's a breakneck pacing to working on the fringes of the galaxy, and of galactic society, that really grabbed me and pulled me right along for the ride.

But Mass Effect always had great characters and story. On the most-improved list, however, the combat sits right at the top. The basic movement, aiming, and shooting feel much tighter here, and I'll put them right up alongside any pure third-person shooter on the market. Honestly, I didn't know BioWare had it in them. But then, you've also got Mass Effect's list of extra combat components--wild biotic powers, ammo mods, tech hacks, and other special abilities--that add depth and variety above and beyond your garden-variety shooter.

Like in the first game, you can still pause the action and dole out commands to your squad mates if you want. I was an unapologetic pauser last time around, but I almost never used that feature in this game, since you can now map a lot more of your and your allies' attacks directly to the controller buttons and D-pad, and you can also tell them where to move and what to attack. Thanks to the improved feel of the controls, the ability to pop off special abilities left and right at the touch of a button without interrupting the flow of the action, and a far more consistent and smoother frame rate, the combat here feels a hell of a lot faster-paced and more exciting than it did last time around. You may never want to pause it again, either.

Longtime BioWare fans should know that Mass Effect 2 feels like less RPG and more shooter than its predecessor did--but they should also know that's explicitly a good thing. The unwieldy, top-heavy RPG mechanics that burdened the first game are gone, replaced by a streamlined system that removes the busywork from outfitting your characters and lets you just get on with your damn mission. Instead of throwing dozens of new weapons and armor suits at you, and forcing you to compare obscure stats between them to figure out which ones you should be using, the game reduces its arsenal to the bare essentials. And it's better for that simplicity.

There are now only two or three weapons in each category, and they're separated more by qualitative differences (ammo capacity, automatic versus burst fire, accuracy) than numeric damage ratings, which aren't even exposed to the player. Likewise armor, which you collect piecemeal rather than as entire suits. Similar to the weapons, the armor pieces give you specific buffs (5 percent to health on some gauntlets, 10 to run speed with new boots, a reduction in shield recharge time with a new chest plate) rather than carrying generic defense values. You can mix and match these pieces as you see fit, and then customize the color scheme of your armor as a whole. All this business only applies to Shepard, since your party members don't even take new armor. Their combat progression relies solely on the abilities you upgrade for them on their skill trees, which are reduced in size from last time and a lot easier to wrap your head around.

Don't mistake all this simplification for dumbing down. The role-playing elements that matter are still here, tied into your interactions with your ship's diverse crew and the galaxy's wild menagerie of alien beings. The brilliant in-line conversation wheel, probably the best thing about the first game, is back in effect, and you could spend hours and hours just chatting it up with every turian, asari, and elcor you encounter on each of a dozen primary worlds and space stations. The real stand-outs are the people on your own crew, though. The majority of the storyline consists of Shepard's attempts to recruit a crack team of experts to tackle his dire new mission, and that gives you a lot of time to get to know all of the new characters that come aboard the Normandy. From a monastic, philosophizing reptilian assassin to a hilariously motormouthed salarian doctor to the ship's all-business talking AI component, everyone in your squad is exceptionally memorable. In fact, I grew more attached to them by the end of the game than anyone from the original, despite the fact that there are more of them to remember this time around. And yes, you can get it on with plenty of them if you're so inclined.

One reason these characters are so well-developed is that every one of them has an "optional" side quest that ensures their loyalty to Shepard's mission (and also unlocks their best special ability and a second costume). I don't consider these missions optional at all, because they're just as well-produced as the quests in the main storyline and they add a considerable amount of depth and back story to both the relevant character and the Mass Effect universe at large. Skipping these side quests in particular would rob you not only of a good dozen hours of gameplay but also much of the narrative texture that makes the game so hard to put down. The hours and hours of expertly written and acted dialogue you get from these quests and other interactions make these characters feel better realized than those in just about any other game I can think of.

Even aside from those main side quests, there's plenty to keep you busy if you want to take a break from the storyline, and unlike last time, it's actually varied and interesting. There are scores of planets in the game to investigate--but the big difference is, you can't land on them if there's nothing fun to do there. You can scan those barren planets from orbit with a slightly tedious minigame to find rare elements that you can cash in for upgrades to your weapons and special abilities. When you do find a side mission to pick up, you take a shuttle straight down to the action instead of driving some ill-conceived ATV there. These missions are usually only 10 to 20 minutes long, but even they all feature unique maps and storylines, however brief. Some of them even chain into little two- or three-part quest lines of their own. There are dozens of hours of content packed into a single play-through here, and that's assuming you don't want to go back and play it again as a bad guy, or a female, or in some other way that differs from your initial run. The differences in player classes are significant enough that the combat will have a distinctively new feel when you play again, and the chance to carry over levels and other bonuses from a previous play-through further sweetens the deal.

BioWare has been making a big deal about Mass Effect 2's save-import feature that lets you bring your own Shepard over from the first game. It turns out, all that hubbub was for good reason. The list of major and minor plot elements that change based on what you did in the first game is too long to recount here; in fact, it's so long that I was continually reminded of minor characters and decisions I'd met and made last time around and then promptly forgotten about, in addition to the more obvious cues like which party member I sent to their death on Virmire, or whether I let Wrex live or not. (Of course I did.) You can certainly play with a brand new character--the game gives you a clever, contextual way to define most of those major decisions that you missed out on--but you'll definitely get the most out of this sequel by bringing an established Shepard over, especially since you're free to change your class and appearance when you do. Similarly, this game wraps up with so much potential variation in its outcome that I'm having a hard time imagining how the designers can make a third game that accounts for all of the possibilities. But judging by the quality of this game, they'll find a way.

Mass Effect started with a huge stable of good ideas. Maybe the task of executing on all those ideas was too great for any one development team to accomplish in a single game, but BioWare has really gotten it right the second time around. They took those same ideas and figured out a better way to combine them into a more cohesive, more playable sequel that makes good on every bit of Mass Effect's potential and leaves me staring very grudgingly at the presumable two-year wait until my own Commander Shepard can continue his fight in the next game.
Brad Shoemaker on Google+
Load Comments 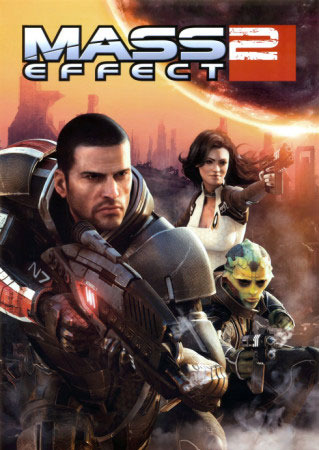